Eye to Eye with a Wild Elk Calf

So rare is it that when in the wild I ever feel so naive, out of my depth, and just plain dumb. Such was the case a couple of months ago when this Floridian (yes the same one who spent many years of his life nonchalantly at ease in the water with wild Everglades snakes, alligators and the occasional American crocodile) headed up into the Rocky Mountains.

It was the morning after I spent the mid-summer night shivering on the ground all night in the Grand Tetons as I listened to nearby wolves howling. Of course I was in shorts and t-shirt…. it was summer right? Snow was visible in every direction on the soaring majestic peaks of this beautiful part of northwestern Wyoming. After eating my fill of wild blackberries in the predawn and washing it down with water from an icy mountain stream I headed into Yellowstone National Park. 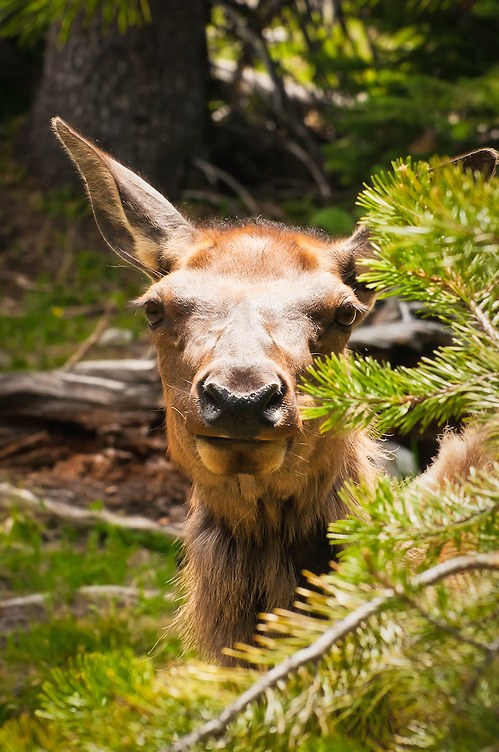 As usual I was prowling through the woods looking in wonder at everything (not a single species of plant or animal was familiar to me) and hoping to find the odd orchid or lily when there was movement ahead of me in the trees. My uncertainty of my surroundings led me to believe that it was certainly a man-eating grizzly bear. Never having seen one in the flesh, they freak me out just about as much as a great white shark (I was born in the perfectly correct year to have the movie “Jaws” ruin the ocean for me).

Then came the inevitable Southerner’s Curse. That’s when the “Ya’ll ain’t never gonna believe this!” mindset kicks in. If it was a bear and if this was going to be my last day as a photographer – it was going to be AWESOME!

There was something brown and shaggy ahead of me in the woods and through the strong scent of evergreen trees and pines I could smell that warm fur aroma that only comes from close-proximity to something big, warm-blooded and wild. I took one last look at my ISO setting and made sure my shutterspeed was set fast enough to freeze any movement. Then I stepped on a twig.

Suddenly this giant deer raised its head from the the ground where it was grazing 15 feet from where I was standing and I nearly slipped and fell and almost soiled myself. Somehow I still managed to squeeze off a couple of shots. This was the first elk I had ever seen, and when I saw the even larger mother come to protect her shaggy calf from danger did I realize what was happening. Not pushing my luck I quickly scrambled to the top of the ridge where the truck was waiting for me.

The Eye of a Killer