The Pacific Northwest is known for lots of things, but did you know its coastal region is also the mushroom capital of North America? Like any fungus, a mushroom or lichen thrives in wet, cool and damp places, especially if there is a lot of shade from conifer forests with deep mineral-rich soils and an oceanic climate that never gets too cold or too hot. For much of the past month, I’ve been taking some time from my usual master naturalist and full-time nature photographer duties to learn more about these lesser-understood fungi and their lichen counterparts in order to understand more about my adopted home’s full scaled-out range of biological/environmental processes. The impact of healthy fungus in this part of North America is enormous – they break down dead and decaying wood and other organic matter to its basic components for all other lifeforms who need it for new life. Without mushrooms, we wouldn’t have healthy forests, other trees or plants that feed on these accessible nutrients, berries and foliage that feed animals or the predators that depend on other forest wildlife. These fungus are at the core of the entire forest ecosystem! 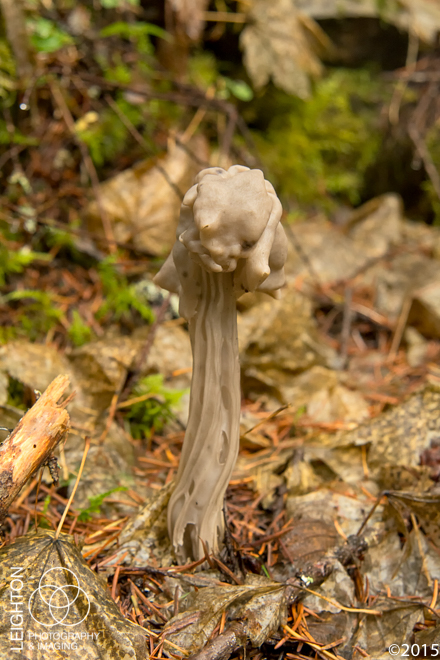 Mushrooms can be truly strange and weird-looking, but when it comes to the group known as elfin saddles, strange takes on a whole new meaning. Found across much of Northern Europe and parts of North America, this completely irregular white elfin saddle mushroom was one of many found in the heavily wooded Cascade Mountains in Washington State just southeast of Enumclaw on a chilly, rainy, November afternoon at mid-elevation. 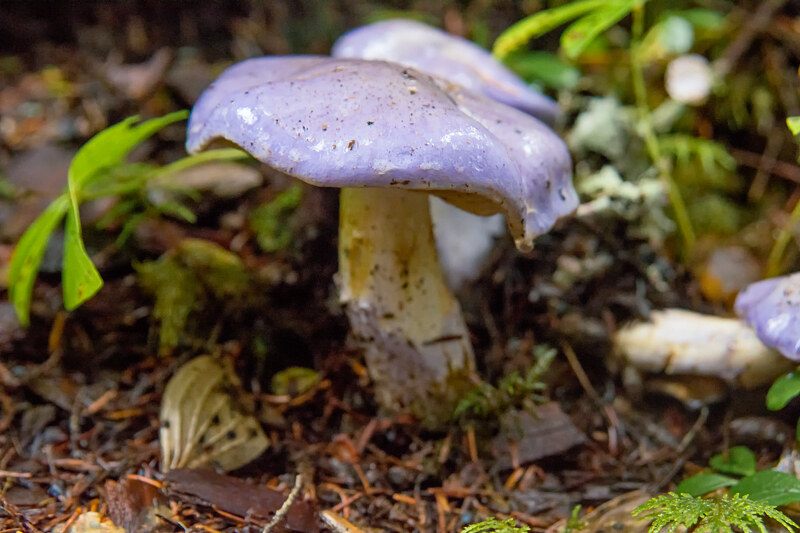 Surprising in the Easter-egg lilac/blue/purple color of this mushroom alone, these stood out in sharp contrast to the forest greens and rich browns on the Mount Baker-Snoqualmie National Forest in Washington’s Cascades Mountains on a cold and wet November morning alongside the Greenwater River. Upon closer inspection, the sudden intense odor of rotting fruit, wet dog, and those orange circus peanut candies came to mind. The underside of these mushroom was cinnamon brown, and so was the spore print I made from one of them. 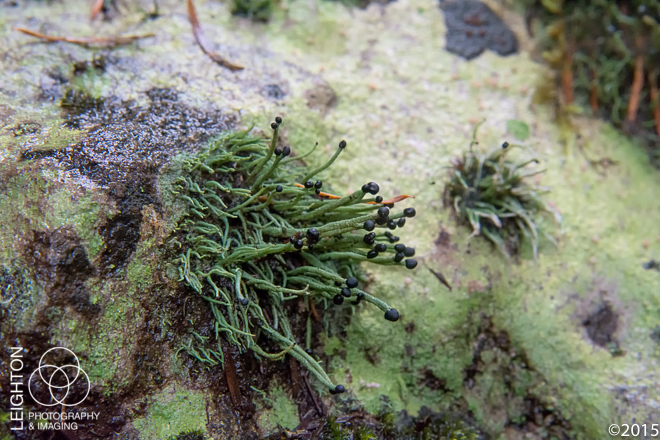 This truly wild and odd looking lichen is also known in some parts of the world as the nail lichen and is found in the Pacific Northwest of North America and in parts of Eastern Eurasia. The apothecia (round black heads) are the reproductive part of the lichen that will release millions of wind-blown spores (similar to a mushroom) that will start a new lichens if they land on a suitable rock. These were found next to the Greenwater River in Pierce County, Washington at mid-elevation in the Cascade Mountains. 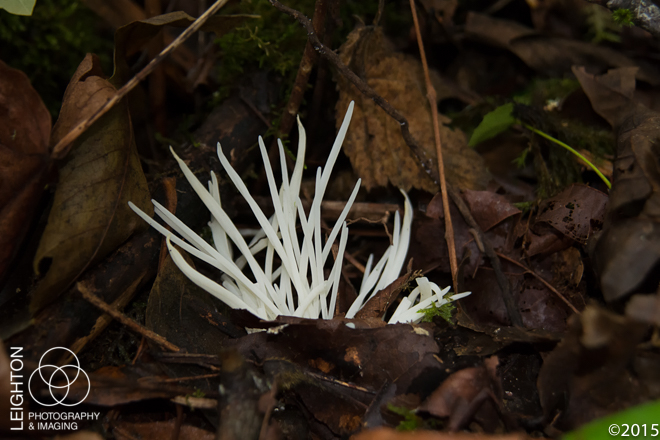 One of the most surprising and unusual fungi species to find in the forests of the Pacific Northwest, this worm-like/coral-like white-to-yellow club fungus was only noticed as I stopped to re-tie a boot’s laces in Mercer Slough in Bellevue, Washington. It is reportedly edible, yet also reported to be completely tasteless. 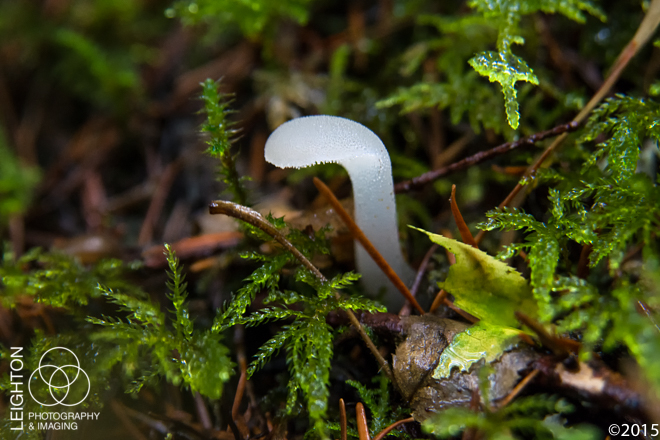 This unique and very interesting toothed jelly mushroom is found throughout the world and grows mostly on decaying coniferous wood. Although it is considered edible, it is reported to have almost no taste, and is often “candied” with sugar and sometimes other ingredients. This one was found in the Mount Baker-Snoqualmie National Forest near the Greenwater River, in the Cascade Mountains in Pierce County, Washington. 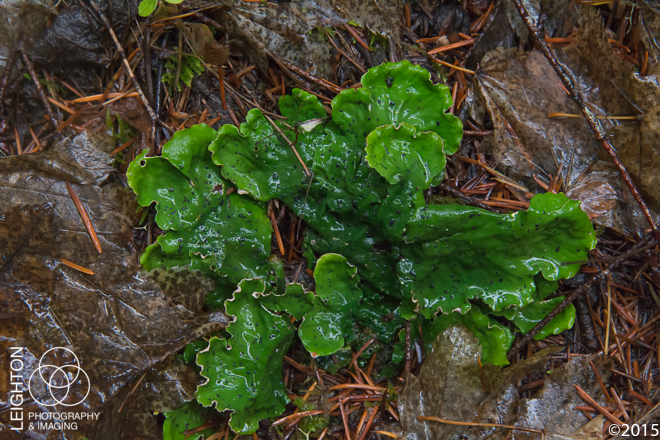 Also known as the green dog lichen, the common freckle pelt lichen (Peltigera aphthosa) is closely related and looks very similar to its coastal cousin, the freckle pelt lichen (Peltigera britannica) except that there are minor, small physiological differences in the brown/black “freckles” and that this one is not found in coastal environments. It is found commonly throughout the Northern hemisphere at alpine elevations, such as this one that was found in the Cascade Mountains east of Greenwater, Washington in Pierce County. 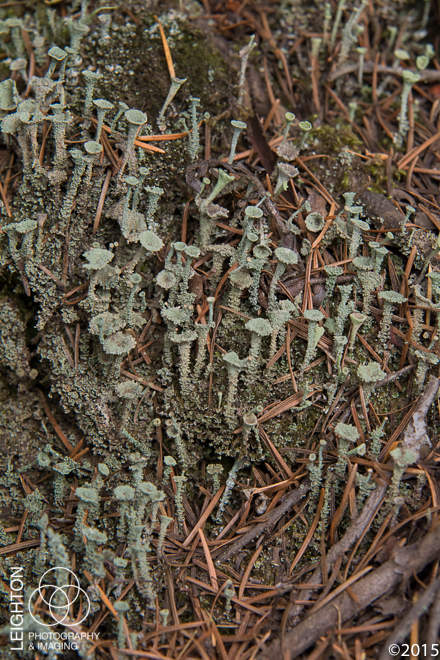 This unusual trumpet-shaped club lichen is found throughout the world in cooler climates in both the northern and southern hemispheres and is usually growing from either moist forest soils or from wood. This colony was found growing among tree roots on Little Mount Si in North Bend, Washington on a chilly autumn late afternoon. 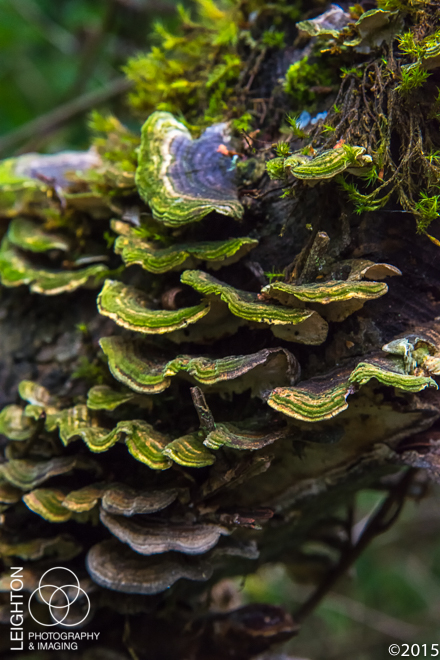 One of the world’s most common mushrooms, the turkey tail mushroom is also one of the most beautiful. Typically found on rotting stumps, branches and decaying wood, these polypore mushrooms can be found in quite an amazing array of colors and hues. It has a long history of use by people, such as making blue and green dyes for clothing, being used to make a tasty tea and for a variety of medicinal uses. Recent clinical research shows that it may be useful for a variety of cancer treatments. This vibrant green colony was found growing alongside Mercer Slough in Bellevue, Washington.

As of the time of writing this, it’s still a work in progress, but there is so much ready to view that I think everyone will learn a lot from it. Let me know what you think, and enjoy!