A couple of days ago, I was driving along the coast of Apalachee Bay on the Florida Panhandle on the edge of Tate’s Hell State Forest when I saw the unexpected. It was a group of 25 to 30 cattle egrets along the shoreline and perched among the skeletal remains of pine trees killed by beach erosion. Strangely peculiar as these egrets are not normally associated with the beach or salt water, and are most often found inland perching on or walking among cattle or horses. I’d just recently had a few conversations about these generally plain and ordinary birds and was saying how as common as they are, I’ve never gotten a good photo of them. They are far too skittish, and seem to only let you near if you don’t have a camera in hand.
Because the road hugged the edge of the beach where I was near Carrabelle, I had to use a trick I often use with skittish wildlife as to not disturb them or at least try to keep their stress level to a minimum. I knew the second they saw me, my chances of a decent shot would fly away with them. I crept up on them in my car in short and steady advances until they were about 20 feet from me. I turned the engine off and kept my face turned away fro several minutes until the birds resumed their previously preoccupied activity of grooming and searching among the shells for food. Balancing my zoom lens carefully and slowly on the door with window rolled down, and hunching down behind the steering wheel as to keep my face hidden behind the camera, I began the wait for my shot. Then I saw this handsome young male egret below: 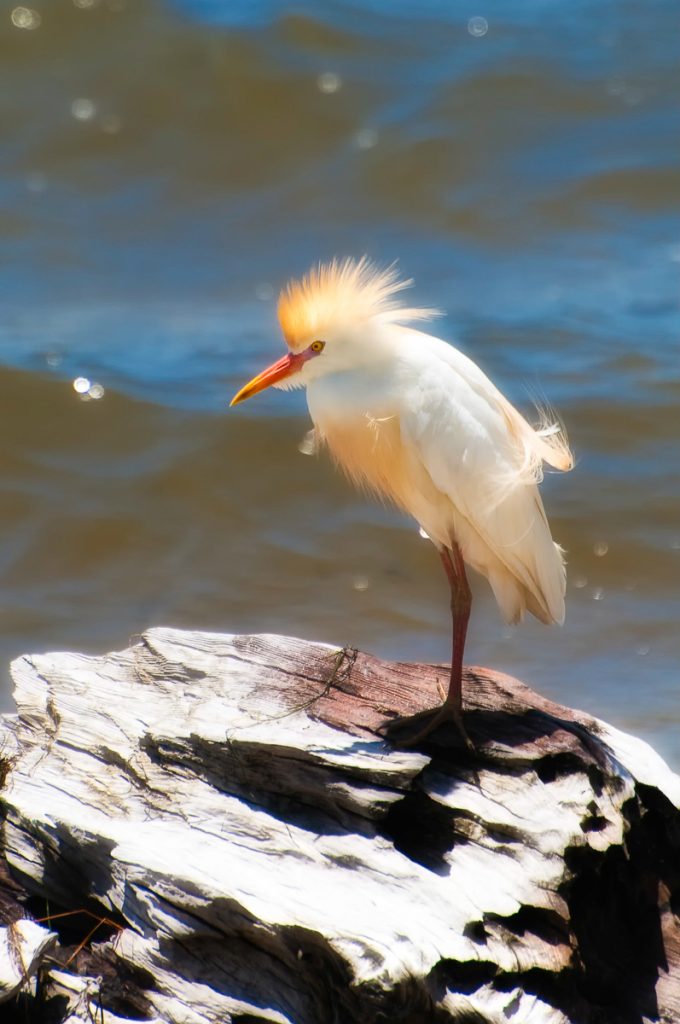 This was a young adult cattle egret in all his breeding plumage splendor. I’d never seen this before in person, although I’ve certainly seen enough photographs to put this on my list of birds I must photograph. The usually dull yellow bill was an astounding gradient starting in a lemony yellow, blending into the brightest of tangerine orange followed by a rich brightness of color around the face I can only describe as raspberry. And this colorful treat was completed with patches of caramel-colored patches on the crown, breast, and back. I took several dozen images over the next twenty minutes, but this one was the pick of the lot. As I was pressing the shutter-release button, this magnificent egret raised his crown for a spilt second, and I caught it perfectly – even backlit by the sunlight reflecting off of the water as a bonus!
Interesting side note and history, cattle egrets are native to Africa and Asia, and were first reported in South America in 1877. They were first documented in the Unites States in 1941, and were breeding in Florida by 1953. Now it is one of the most common members of the heron family in all of North America.