After a considerable delay, and admitting that I may not find the Downey Rattlesnake Orchid (Goodyera pubescens) this year, I will continue with this second part of my North Florida native orchid-hunting blog without having photos of it to finish it off. It is actually a blessing – as this is the only fall/winter orchid in the north part of the state I haven’t found yet, and it will keep me focused on finding new unpopulated and wild areas on the Florida Panhandle to locate, explore, hike, and search.

For these past few weeks, I’ve made a larger round of travels from the Santa Fe River near Lake City to the area around Marianna near the Georgia and Alabama state borders. I covered much of this area from the border to the north to the Gulf of Mexico. I had a much better time as a photographer with non-orchid subjects – many of the photos will be saved for my next blog – you’ll see why. 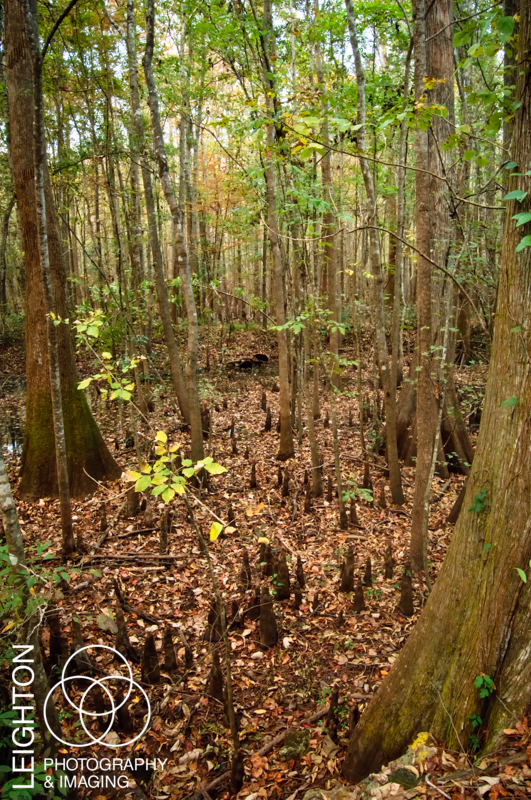 Typical river floodplain found all over Florida. Young cypress trees like these are often found in depressions near lakes, swamps, or rivers – and are often great places to look for orchids – depending on the time of year and the species one is after. The reason North Florida fall orchids are so easily found as opposed to the spring and summer varieties is the fact that most of the forest leaves have fallen greatly increasing visibility, and this brownish/golden carpet of dead and fallen leaves makes a great contrasting backdrop for the spiraling white ladies’-tresses, shadow witch orchids, and others that can often be seen from a distance. 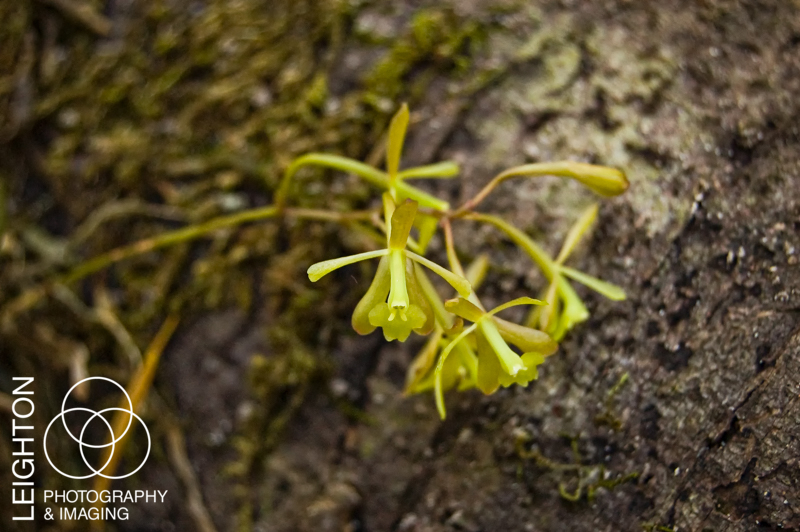 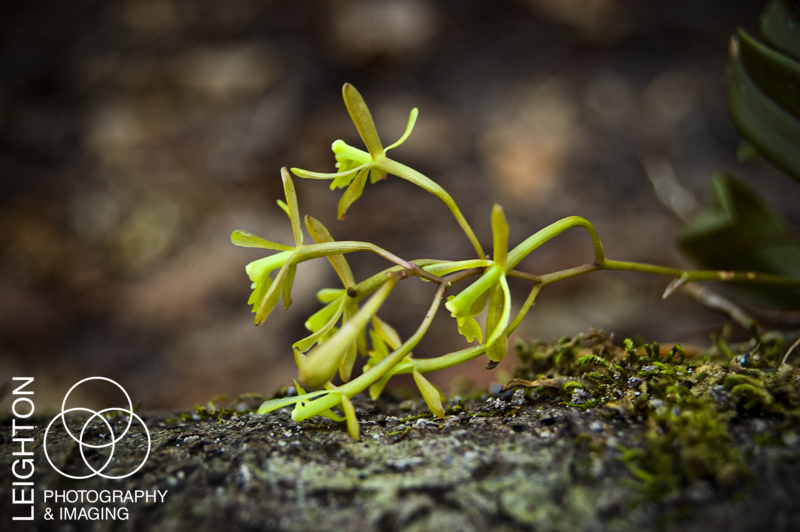 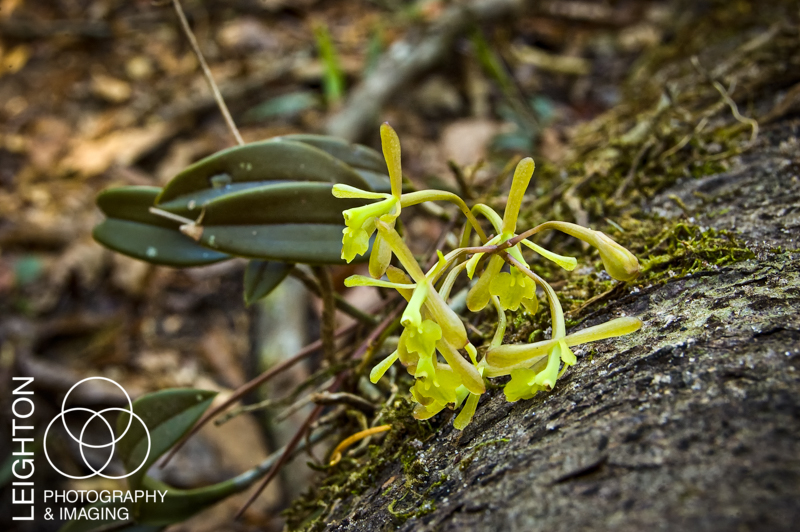 The green-fly orchid (Epidendrum magnoliae var. magnoliae) is the most common orchid to be found in North Florida, and can be found growing above any large wet sinkhole, spring run, swamp, lake or pond. I have seen them all over the top half of Florida from Homosassa Springs to Orlando to the Suwannee River on the Georgia border to Washington County. It is the only epiphytic (growing in trees as opposed to in soil) orchid found in the northern half, where there is a natural division between it and its southern counterpart – the butterfly orchid (Encyclia tampensis) which is the most common in the southern half of Florida. There is an overlap in the middle where I’ve seen both orchids growing near each other. 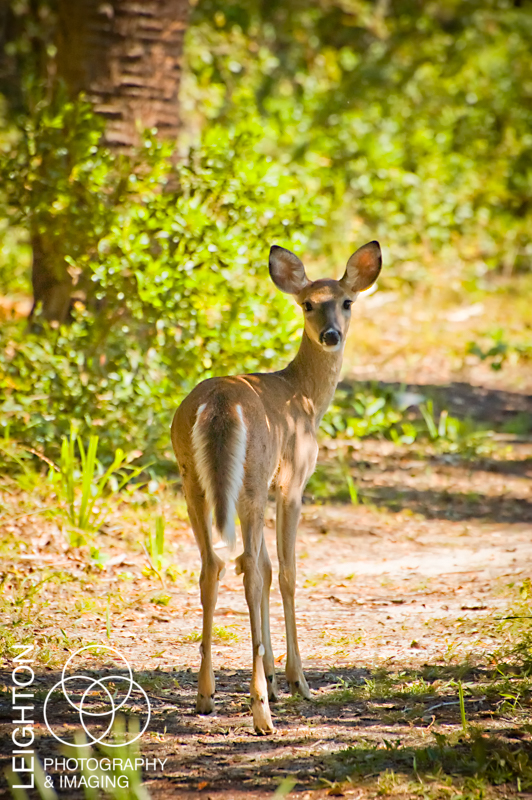 Deer are all over Florida, and I see them nearly every time I am out photographing nature. This one was photographed by my wife Galina while we were checking out a new area in Jefferson County. This doe let her get quite close to her, and really didn’t spook easily. Eventually she just walked off casually after posing for this shot! 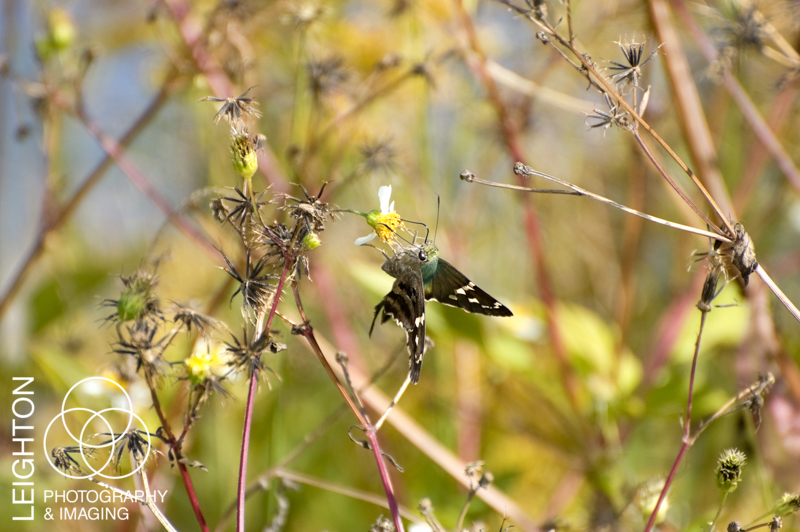 Minutes later in a clearing we found this Long-tailed Skipper butterfly feeding on the last of the year’s beggar-ticks – one of the most annoying of all of Florida’s wildflowers. You will know them by all the double-pronged seeds that always seem to find a way to latch onto your socks! 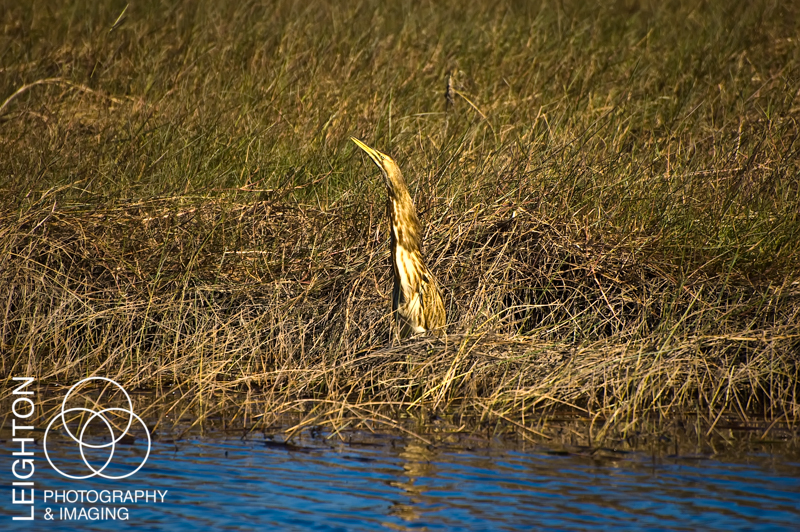 Finally!!! I’ve been trying to photograph one of these for years, but always managed to foul up the shot. This is an American Bittern, member of the heron and egret family, and is either quite rare or has very good camouflage, or both. When approached, this bird will raise its head straight up and appear just like a stick, or if it is in tall grass or reeds, will blend in perfectly. I didn’t see this bird until I was about 40 meters from it and I got to about 30 meters for this shot before it took off and flew away making the worst racket ever heard from anything with feathers! 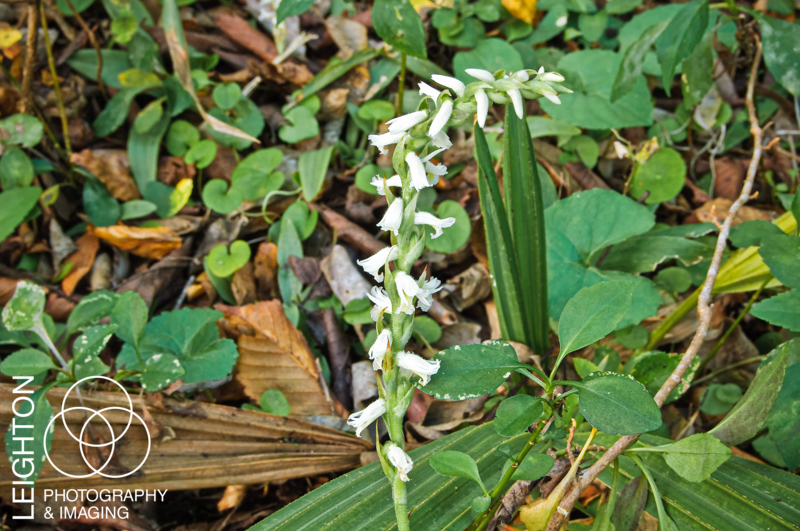 While combing the state’s spring-fed rivers and creeks, I found quite a lot of ladies’-tresses. Some were listed with photographs in part one of this blog, and others I have already photographed hundreds of times and can be seen in my web galleries at www.FloridaNaturePhotography.com. This particular orchid is a hybrid between two northern ladies’-tresses orchids found in the fall, Spiranthes odorata and Spiranthes ovalis var. ovalis, and is known as Ichetucknee Hybrid Ladies’-tresses (Spiranthes X ichetuckneensis). It occurs sporadically all over the area where there is sufficient moisture in the topsoil year-round. I usually don’t pay much attention to hybrids, but there was a gap where the photos of the downy rattlesnake orchid that still eludes me should be! 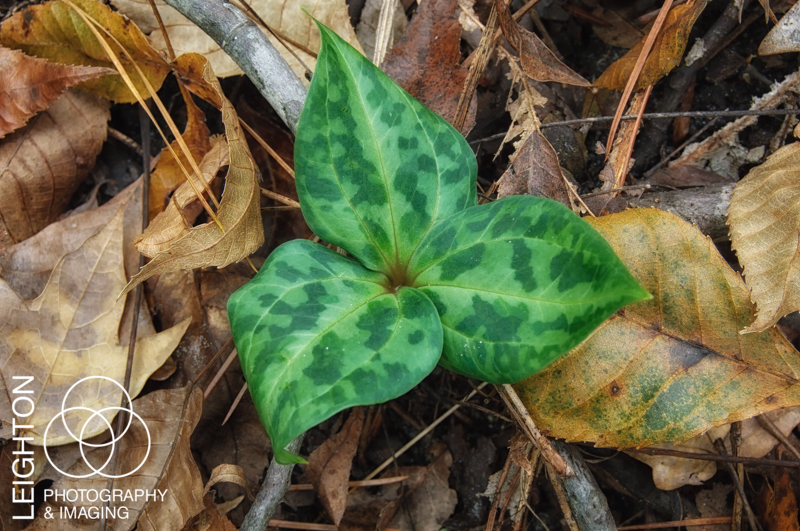 A trillium!!! Usually these aren’t seen until late-winter not in early November, but this one was found growing behind a tree (a common place I visit when bringing hot coffee with me on a cold morning). These are my absolute favorites, and I can’t wait to photograph these beauties when they are in flower!!! 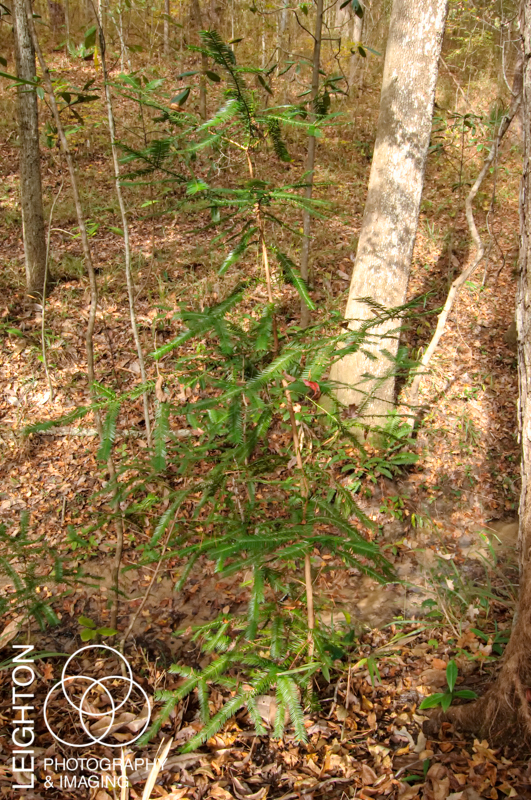 This was a rare find! This is the critically endangered Florida Torreya (Torreya taxifolia), also known as the stinking cedar for the odor of its leaves when crushed (no I didn’t) and is one of the rarest trees in the United States. At the time of this blog, it is estimated that there are about 200 left uncultivated in the wild. In this photo – you can see a very young tree about two meters and another sapling in the far left corner and there was a third just popping up from seed under the tree. My wife and I had become lost in the forest when we happened to run into this extremely rare trio. 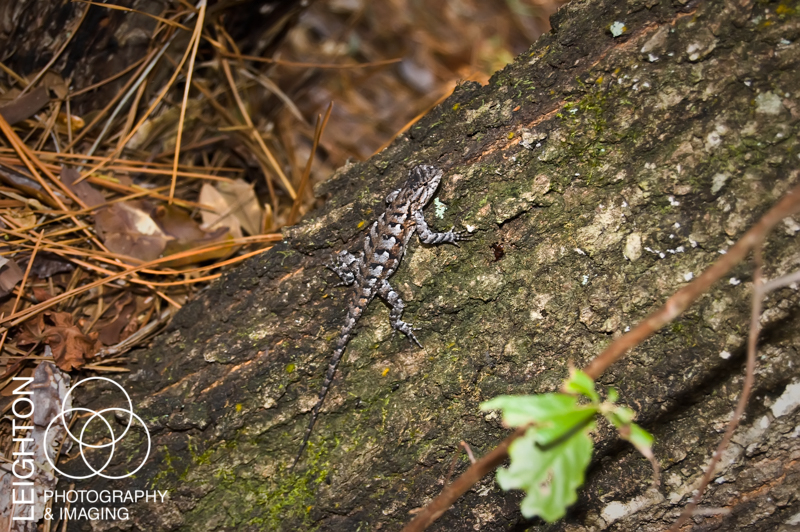 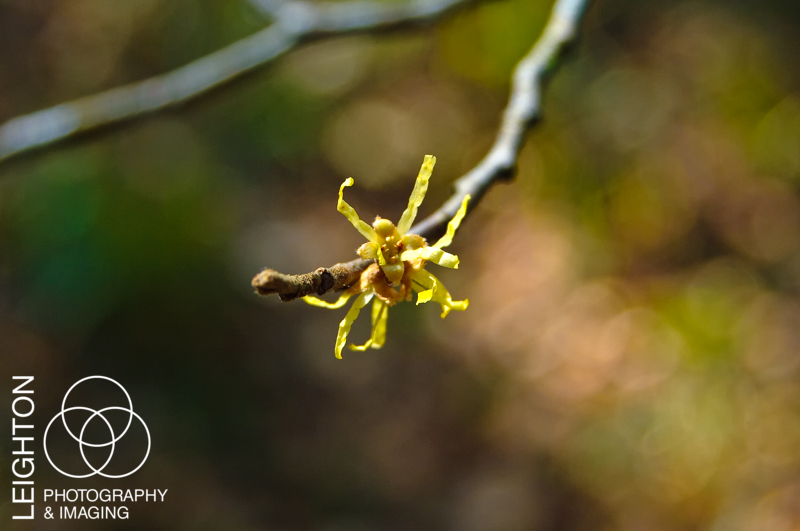 Another tree I found along the way was the witch hazel, which had an interesting enough flower for me to include it. 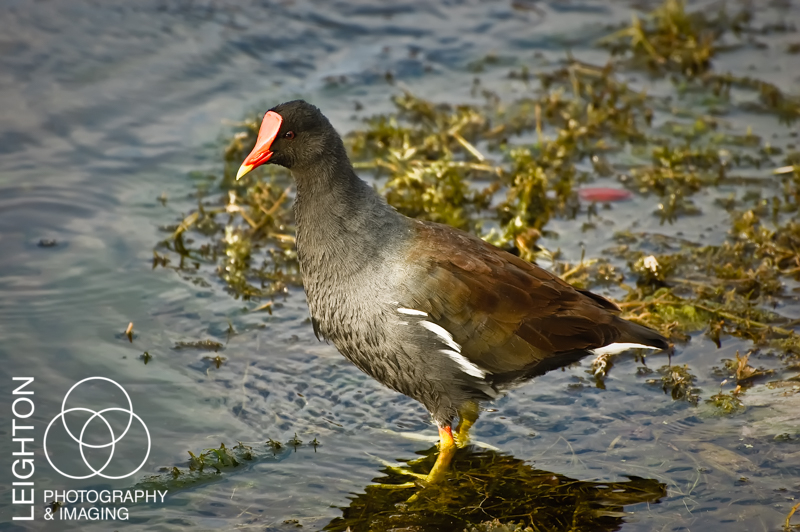 The pond chicken, or common moorhen, photographed here in Wakulla Springs. These odd birds can be found all over Florida, and usually don’t allow people to get this close to them. Huge feet enable them to walk on aquatic vegetation in search of food. I see these most often when looking for orchids on the edges of swamps. 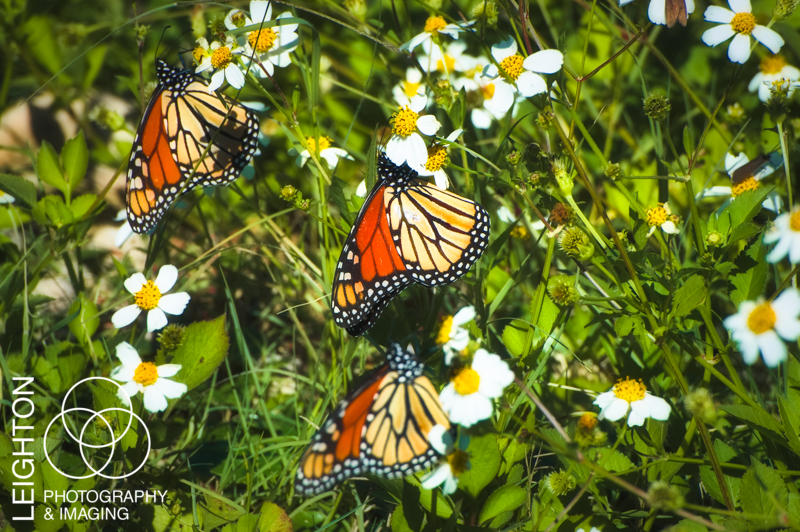 One great event not to be missed in late fall on the Gulf of Mexico are the great swarms of monarch butterflies. These were photographed in the St. Marks National Wildlife Refuge next to the beach where they were getting their last meal before heading out across the Gulf to Mexico and Central America. There were literally thousands of them! 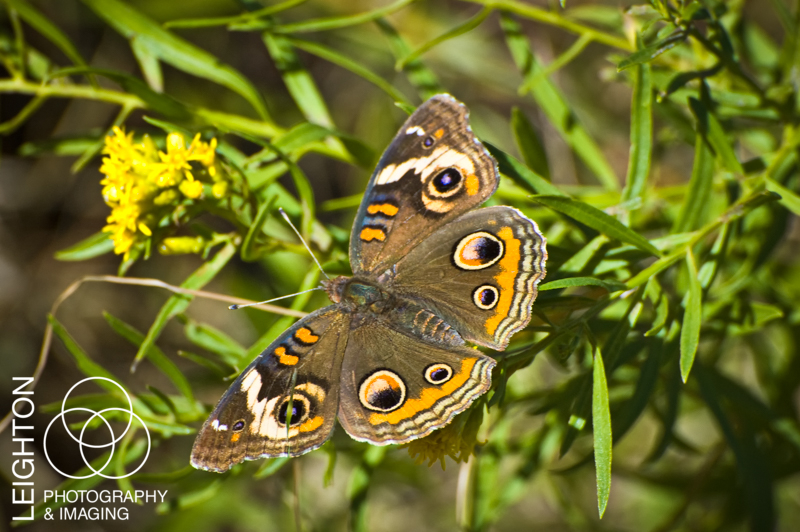 Among these monarchs were a few common buckeyes, as well as a few other butterflies. 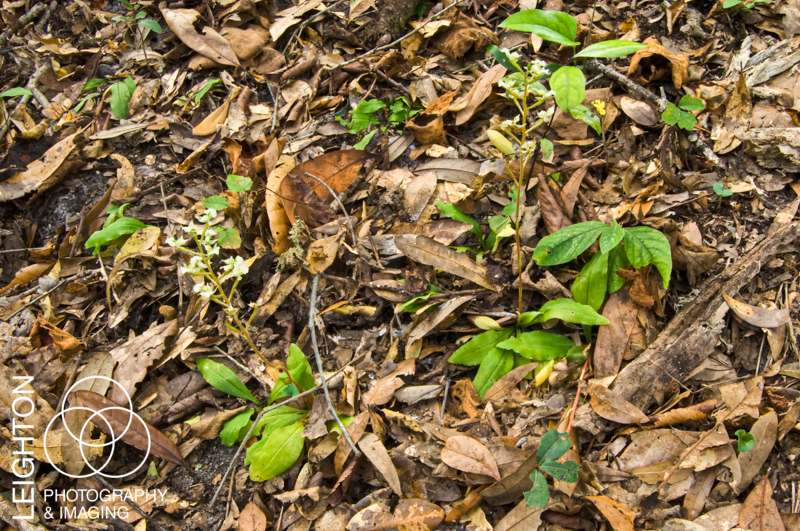 Traveling back inland and heading toward Live Oak, these shadow-witch orchids (Ponthieva racemosa) were found among the leaf litter and the poison ivy and ferns along a spring creek. I have found these all over the top half of Florida, and always find them in damp locations. These tiny flowers can be almost invisible until you get close to them – then you can see the sheer beauty of them! 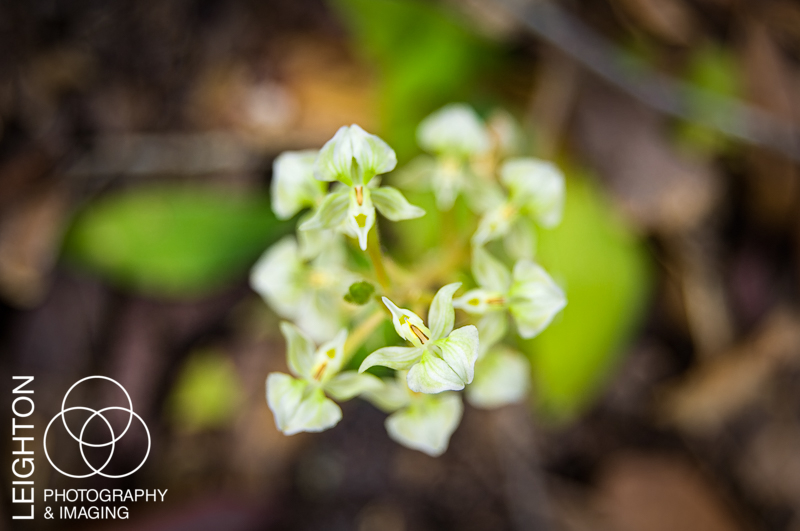 Shadow witch orchid photographed from above in full flower. 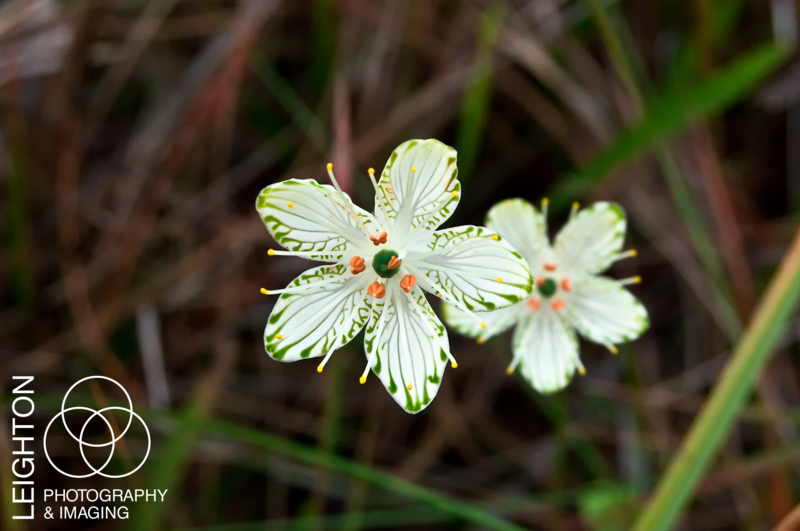 While not an orchid, this was one of my happiest finds of the season – the large-leaved grass-of-Parnassus. I’ve never seen anything like it, and having known about it for years, it was a real treat for me to find it while wading through an icy-cold swamp. This was the best I could do to focus with freezing hands while shivering! 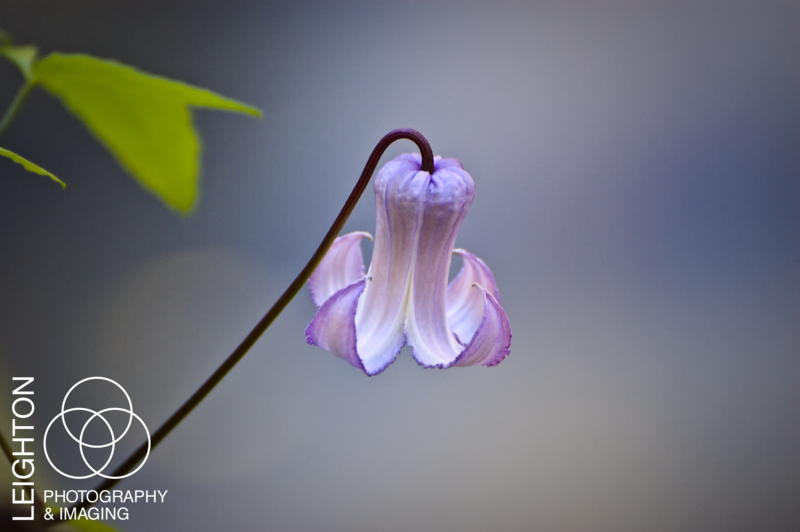 Blue jasmine growing on the edge of Lime Sink near the Suwannee River. This flowering vine nearly caused me to fall into the water while setting up a tripod on a steep bank. The sky reflected in the out-of-focus water in the background really made for a nice shot!

Apalachicola River as seen from high up near Bristol, Florida.
Hunting orchids for me does not necessarily mean finding orchids. It is often looking for places where they might be, testing out my knowledge of the land – both with a good understanding of geology and biology, as well as natural history and a love for my home state. There is a wonder and beautiful feeling when a new orchid that I have never seen before is found through hard work, usually through very uncomfortable and sometimes dangerous conditions, and knowing that if I keep quiet about it, I can mark it on my GPS and visit it anytime I want and it will still be there.

Hunting orchids also means everything that orchid hunting is not. 90% of my photography sales come from all the things I photograph while hunting orchids. These are all the beautiful landscapes, birds, snakes, flowers, etc, I find while wading through swamps with snakes and alligators, climbing trees to get that good close-up a flower, or sliding down a ravine with no way of stopping with my gear spread out all over the hillside. Not only is it good fun most of the time, it is also a way for me to bring to you what Florida is really about.

My garden is Florida, to help protect, keep beautiful, and to do my part in keeping it as unspoiled as one photographer can do. There is a message in many of the state parks and wildlife areas that I see all over the state that says it best. – “Take nothing but pictures, leave nothing but footprints”.