A Face only a Mother Could Love

Vultures: nature’s clean-up crew, scavengers, the nastiest animals alive – whatever you want to call them, they are essential in the promoting health and well-being in nature. They eat the dead, and thus prevent the diseases and harmful germs of rotting and decomposing flesh from getting transmitted to the living. The black vulture (Coragyps atratus) in these three images is a very common sight in the skies and roadsides nearly anywhere one looks in the southern United States, particularly in the Southeast. This range extends south to cover all of Central America and most of South America (excluding the Far South where it gets too cold).

As I’ve often seen personally, black vultures will usually swarm an animal carcass in large noisy groups, gorging themselves as fast as they can. Their heads are bare of feathers, which helps protect them from disease as they often plunge their entire heads into the body cavities of dead deer, cattle, etc. 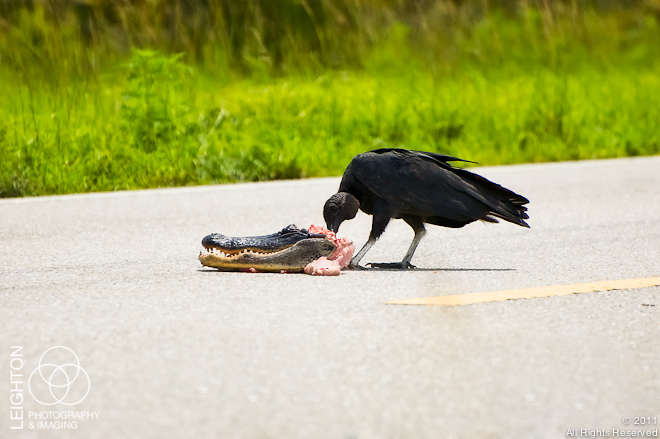 The image above was taken about four years ago on a rural road in South-Central Florida. It looked like alligator poachers had been at work deep in the middle of nowhere and left the head on the side of the road. Truly one of the strangest sights I’d ever seen on a highway, I decided to stop and get a shot and in the process momentarily disrupt the fifteen or so vultures that were fighting over this “tasty morsel”. This particular individual took the opportunity to get a couple extra bites in before being shooed off. 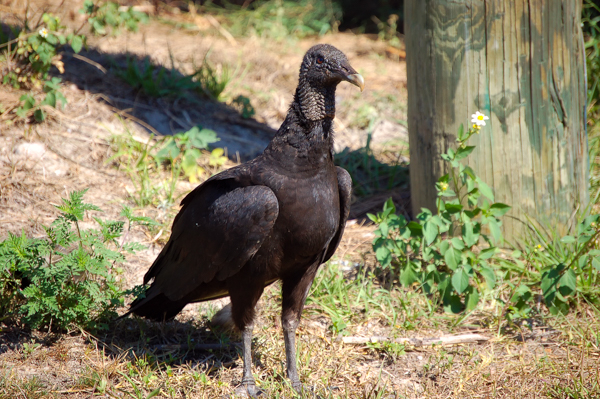