Over the years I’ve seen all kinds of snakes meet their end at the end of a beak, but the other week in the Nisqually National Wildlife Refuge just outside of Olympia, WA, I saw a first. A great blue heron (Ardea herodias) I was stalking at the edge of a flooded wetland and it started doing a very strange movement I’d never seen in all my years of wildlife photography all across North America. It was a rapid, frantic side-to-side movement, then a sudden stab into the grasses, followed by the retrieval of a large garter snake. 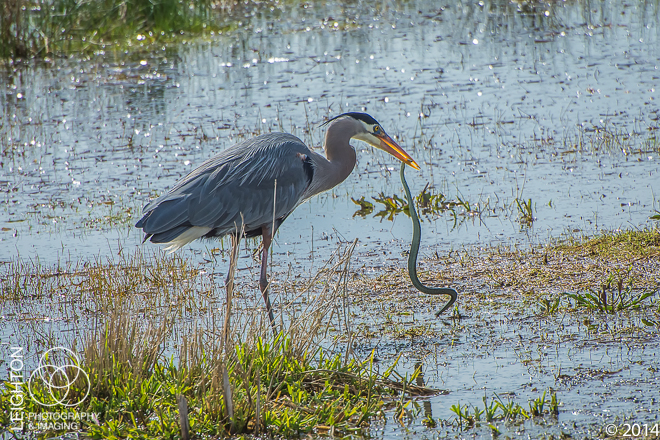 I’ve seen many dozens of wood storks aggressively catch and devour snakes over the years, but this frantic back-and-forth attack strategy had me completely confounded. Had I not already been photographing this beautiful bird, I would have missed this shot, which immediately after I pressed the shutter-release, it flew a short distance away and swallowed its catch whole.

After getting the photo on my computer and blowing up the image, I was able to identify the snake as a northwestern garter snake (Thamnophis ordinoides).

So sorry this post took far too long in getting out… I’ve been busy with a lot of commercial product photo shoots in Seattle and still very busy with my master naturalist training and education in Bellevue….

Slithering Beauty of the Cascades