Air Plants to Some, Bromeliads to Others

Growing up in Southwest Florida, air plants were just about as common to me as sea gulls. Over the years as I gradually fell into the role of a naturalist and wildlife photographer, I’ve heard, learned and picked up a lot of information about these unusual plants and their habitats. Not only are they special, they are becoming very rare.

(click on any image to see the entire gallery) 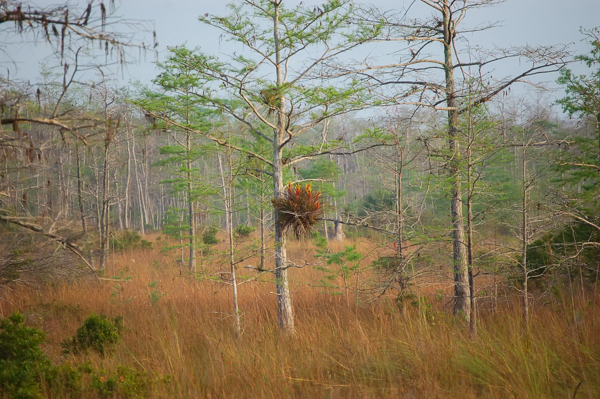 A beautiful cluster of cardinal airplants in bloom growing in a cypress tree in the Florida Everglades near Homestead. These endangered epiphytes are often visited by hummingbirds.

There are about 3000 known species air plants (or bromeliads as they are known outside of my old stomping grounds) and are found only in their native ranges of tropical North and South America. Bromeliads are members of the pineapple family, don’t have a stem, and are often epiphytic (meaning they live in or on trees). Instead of being in the ground like most plants, their roots act as anchors to keep it firmly in place so it can resist wind, rain or contact with other branches or animals. Because so many of them grow in dark locations deep in the wetlands, the added elevation can mean more access to sunlight. In many places where the range and habitat of very similar species overlap, some hybridization can occur. 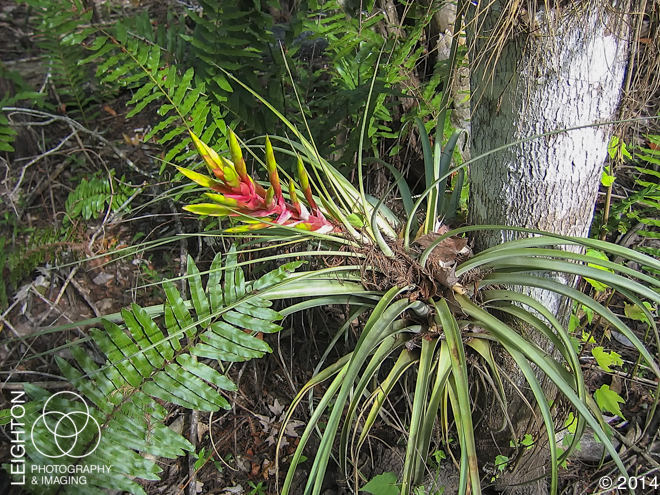 This massive yet common airplant in the wilder parts of the Florida Everglades blooms in the winter among the cypress groves and hammocks of the swamps.

Nearly all of the bromeliad species in the United States are found in Florida, which has 16 native species and two natural hybrids and ten of these are listed as endangered or threatened. Most of these are found in the Florida Everglades and adjacent freshwater wetlands. There are exceptions, such as Spanish moss (which is not a moss) which prefers a drier habitat, often in live oaks. 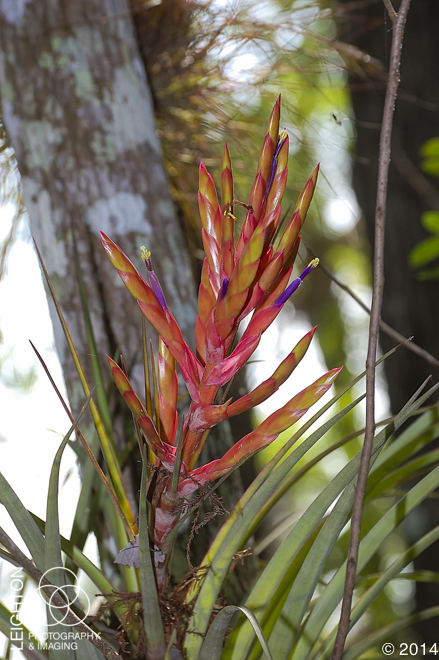 Close-up of the inflorescence of the cardinal airplant, photographed here deep in the Fakahatchee Strand of Southwest Florida. You can just see a few of the purple flowers emerging.

There is a sense of confusion with many people who erroneously call these plants orchids, which often grow side by side with bromeliads, and are equally rare and threatened, but are not in the least closely related. 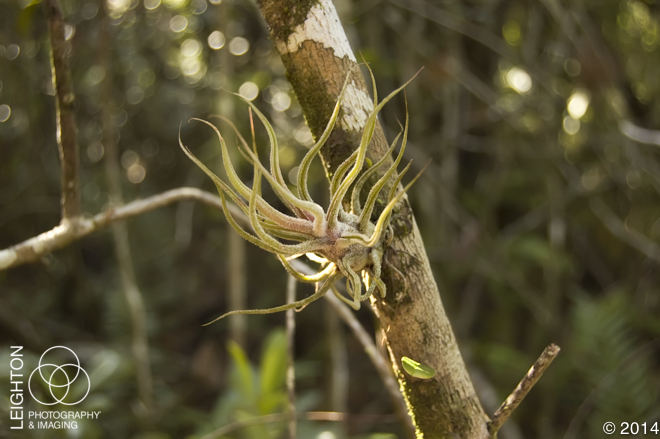 Also known as the hoary airplant, this rare bromeliad is infrequently seen in the Fakahatchee Strand in SW Florida, as this one was.

Bromeliads get their nutrients much the same way as orchids do, directly from the air, through rainwater, and sometimes from organic matter or dead insects that accumulates in the trapped water between the leaves. Ecologically, these water-holding leaves are important places for many small animals to hide, lay eggs, or provide a shelter or hiding place. 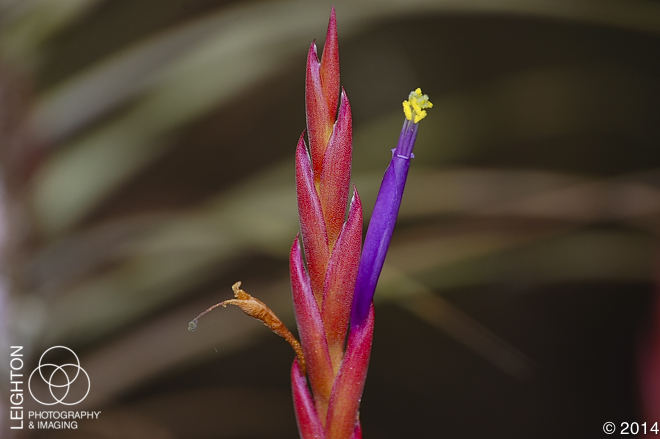 Close-up of the incredibly colorful inflorescence of the northern needleleaf airplant, one of many subtropical airplants only found in Southern Florida. Soon after flowering it will die (typical of bromeliads), and the drying seedpods will split, sending the tiny airborne seeds to take root on another tree to start the next generation.
There are three main threats that are imperiling these already rare plants:
Threat #1 Habitat loss – the devastating and thoughtless greed and development in Southern Florida has wiped out most of the wild regions, and those that still exist lack the necessary wildlife corridors to keep plant and animal populations healthy. Native plants are further apart so they can’t be pollinated, effectively making the gene pool smaller resulting in less genetic diversity. These means weaker plants and plants more prone to disease. 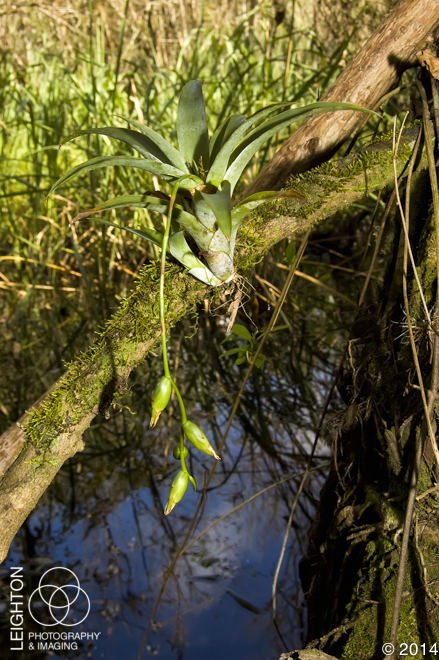 The super-rare nodding strap airplant growing over a pond in the Fakahatchee Strand in SW Florida.

Threat #2 Over-collecting. In the past 20-30 years, it has become popular to have collections of bromeliads. As demand increases, so does poaching and since these plants usually grow in such remote locations, the chance of being caught is almost non-existent. 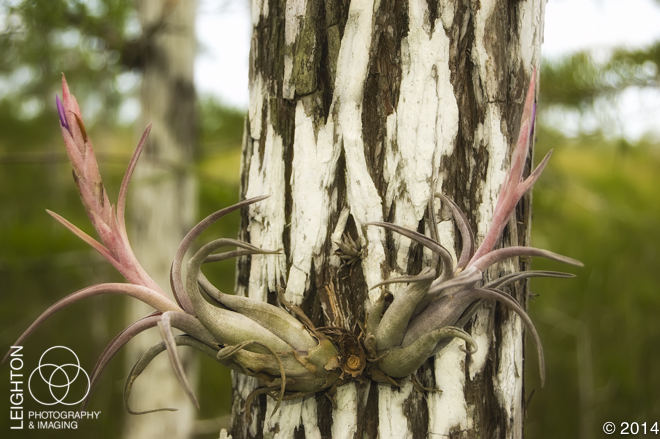 Potbelly airplant growing in the Everglades National Park. These are very common in the wetlands of South Florida, and are most often found on cypress trees.

Threat #3 Invasive Species The biggest threat so far in the invasive and widespread Mexican bromeliad weevil (Metamasius callizona) which lays its eggs in the bromeliads, and the hatching larvae feed on their host, killing it. There is a native counterpart, the Florida bromeliad weevil (Metamasius mosieri) that has the same needs for reproduction, but as our native species evolve together over the millennia – our native bromeliads can survive being the nursery and host to their parasitic native counterparts. Since there is no natural predator to the Mexican weevil, it is increasing in numbers and range across Florida since its natural predators are still in Mexico. 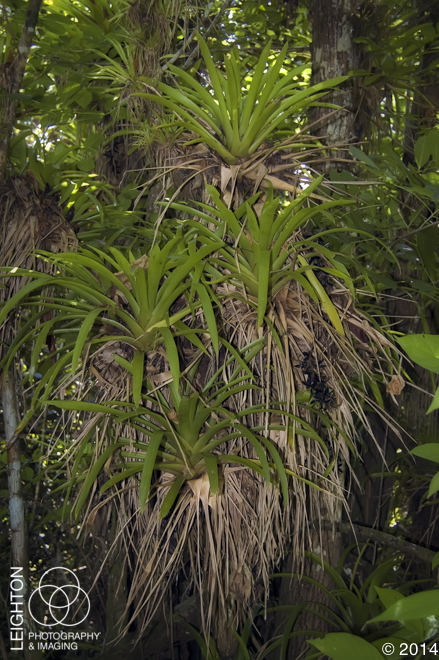 Bromeliads are as common as orchids in the Fakahatchee Strand in Collier County, Florida. These huge West Indian tufted airplants have literally covered this pond apple tree.

Just a quick thank you for the massive response from my last couple of posts! Since so many of you are in Florida or spend at least part of your time there, I decided to add this post on bromeliads. If you would like to see a post on anything about photography, wildlife photography or anything else related, please let me know in the comments below and I’ll do my best to get something put together for you as soon as humanly possible.