Thirty minutes past dawn, and I’m deep in the the steamy sweltering heat at the edge of a swamp in North Florida in summer. Mosquitoes are tearing me up, but the deer flies aren’t out yet. Again, I’m not using insect repellent because I can’t stand the way it feels on my skin, and my clothes are soaked from the humidity.

I must look like I’m out of my mind. Decked out in camouflage, heavy boots that can repel the fangs of the largest cottonmouth, heavy backpack filled with all essential camera gear, including several types of flashes, lenses, and filters. Camera slung across my chest on one shoulder and a water bottle slung across the other like ammo belts, and a heavy tripod that can take (and has taken) a beating over one shoulder. I’m dressed for war, but why am I twirling a long thin stick in front of me at head and shoulder level as I move through the trees? 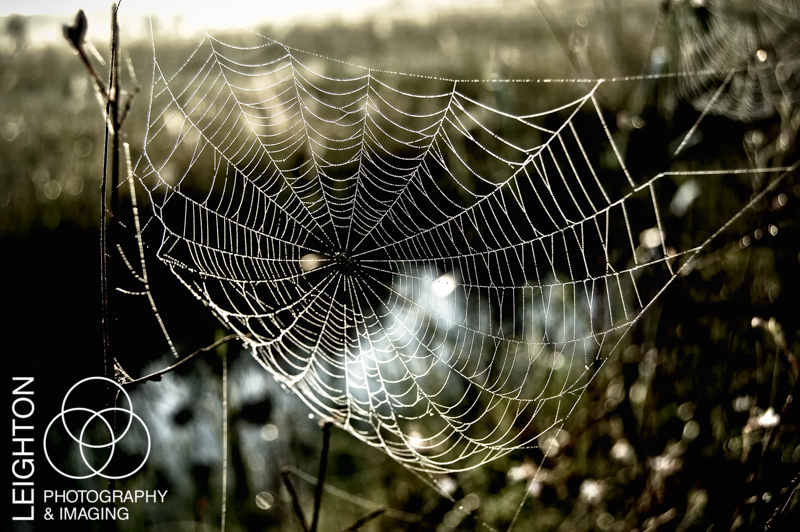 Of all of the obstacles, discomforts and things to avoid while in pursuit of all things wild to photograph in the Florida wilderness, spiderwebs are at the top of my list of creepiness. I am one of the few who are very fond of spiders, and love to get close to photograph them, even if it means handling them to place them somewhere so they are easier to photograph. I have been bit by some of the most exotic tarantulas in the world, including those nasty Asian ones, but for some reason, walking into the web of a big silk spider unexpectedly really freaks me out.

So…. what is so great about spiders? It’s a really simple answer – once you get past the primal and naturally ingrained fear (arachnophobia) all people have to some degree, they are really quite beautiful! 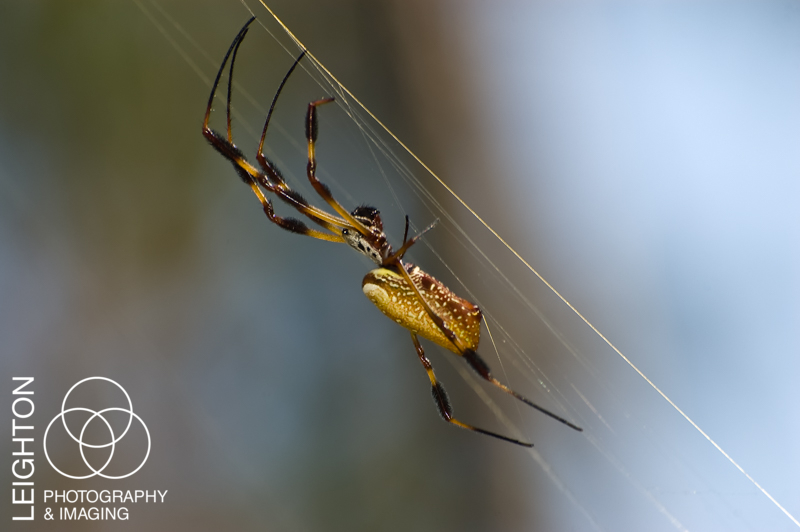 This golden silk orbweaver (Nephilia clavipes) is the most common spider I encounter when walking between trees. They are all over Florida, and in nearly every environment. I’ve seen them over salt water among mangroves, in freshwater swamps and among sinkholes in hardwood forests, and spread from palm to palm in the most unlikely of places. 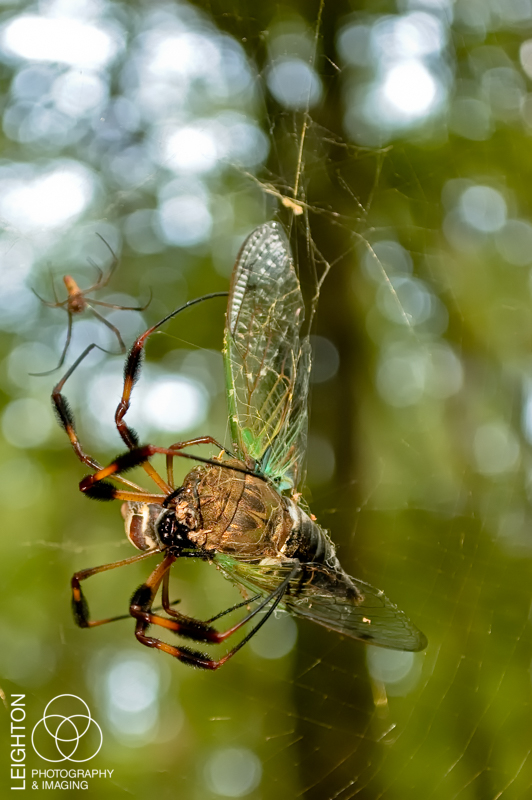 This huge yellow and black spider (often wrongly called a banana spider – those highly venomous and non-related spiders are in South America and have killed healthy adults) can have a leg-span of four inches, and spins a web up to three feet across, with anchoring webs up to eight feet.

The web of the golden silk spider has beautiful golden threads in the middle of the “trap” part of the web when seen in bright sunlight, but most often the web is felt while walking into it before it is seen. Or the spider is seen when inches from the face resulting in a heart-hammering halt, followed by the “heebee-jeebee’s” shake or dance. If you are laughing as you read this, then you know exactly what I’m talking about!

Last fall when looking for a rare variety of terrestrial orchid to photograph, I walked into the biggest silk spider web with spider I have ever seen, and wish I had it on video. I felt the spider race down the back of my head, neck and all over my back and arm. I freaked! I got undressed faster than on my wedding night, and went charging through the forest, camera gear and wits left far behind. Not only did I end up running like a girl scout, I think I may have screamed – spiders just have that effect on people, whether you like them or not! Good thing I was alone…..haha!

The spider above was photographed while photographing the crane-fly orchids a couple weeks ago, with a cicada, which is a huge insect itself. Notice the tiny male in the background. He’s probably next on the menu, after mating. I’ve often seen them with full-grown lizards caught in their webs. These webs are so strong, that they can actually physically slow you down when walking through them by accident. Studies have shown them to be stronger than steel in diameter. Several years ago, a friend and I were asked to collect numbers of these for a study by a New York university. They were trying to see if they could make a material stronger and lighter than Kevlar – well known as the material used to make body armor for the military and police. I wish I knew what they came up with…. 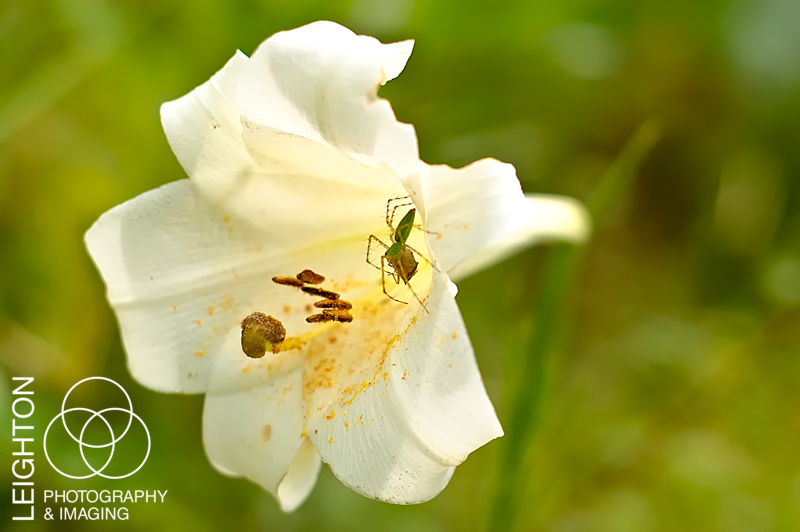 Florida’s spiders come in all sizes and colors, and some – like this green lynx spider (Peucetia viridans) do not use webs to catch prey, but rather wait inside flowers or pitcher plants to ambush unsuspecting insects. These spiky beauties are very common in North Florida, and I’ve seen them all over the state, but just not so often south of the Panhandle. 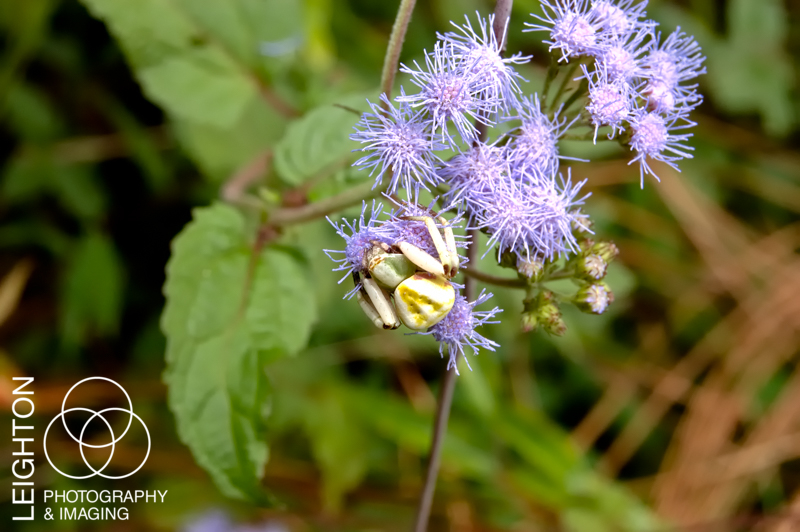 The goldenrod crab spider (Misumena vatia) uses much the same tactics to catch prey, and does not seem to discriminate in regards to size. I’ve seen a quarter-inch crab spider catch and eat a full-sized butterfly!

This will be my last spider for this blog – more can be seen on the website for those wanting more. This is a spider I see occasionally in the darker and usually wetter forests in Florida – often among cabbage palms and palmettos. It’s the red-femured spotted orbweaver (Neoscona domiciliorum) and is usually no bigger than three-quarters of an inch in body size. Very pretty red legs, but very skittish and hard to photograph. I don’t know much about these guys yet, but
the outdoors is my classroom, and I’ve lots more to learn. 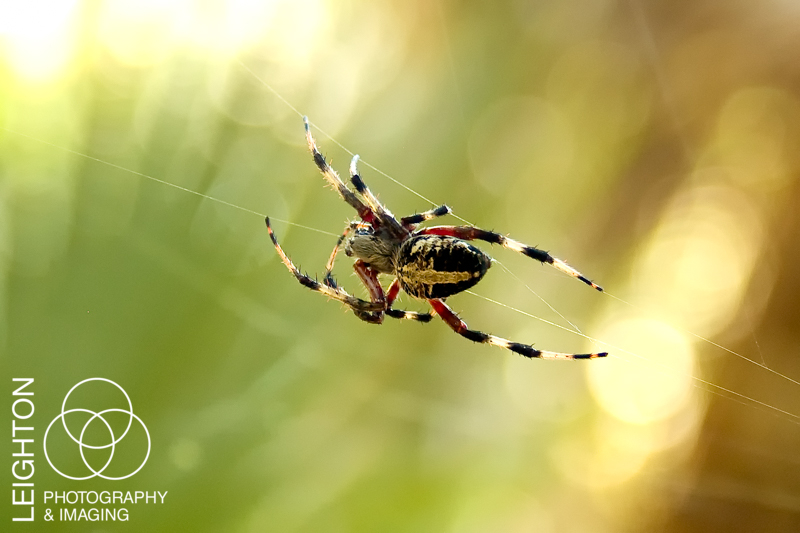 There are many more spiders of all different shapes, colors, and habits, but I’ll stop here. Just to dispel any myths since I have your attention, there are no deadly native spiders in Florida. We do have three species of widow spiders that are extremely venomous, but inject such tiny amounts of venom, a person would have to be very young, old, or sickly to be in any danger. Pain, nausea, sickness, and even tissue loss might result, but nothing like in the movies. This also includes the famous brown recluse. Of course we get all kinds of exotics entering the state all the time, and it’s best to leave them alone, or call Fish and Wildlife if you are concerned. If you see a spider and don’t know what it is, it is probably best to just avoid it.