This is my second entry into my new series, Ancient America which features a minimalistic, raw and unpolished look at black and white landscape photography from around North America from the viewpoint of what it would have looked like before people arrived. 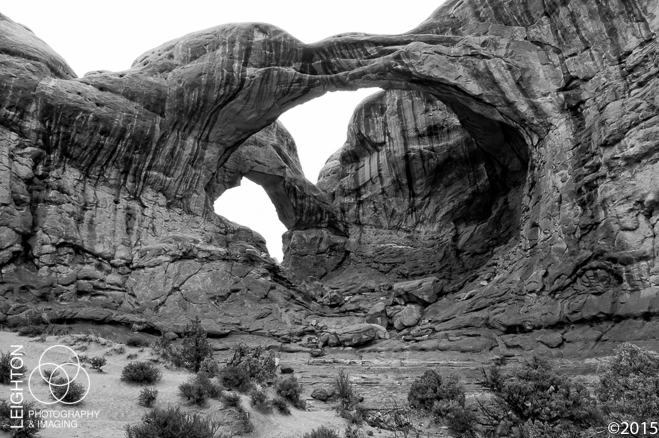 Double Arch is found in Arches National Park in Eastern Utah and is part of the amazing red alien landscape that is called the Moab Desert. This area has the largest number of natural stone arches than anywhere else in the world, but what makes this rock formation so unique is that they were both eroded from the very same piece of stone. Most arches are formed from water erosion flowing either within or from the sides of the rock over the millennia, but these two arches were formed from water eroding from the top of the stone, downwards. For this reason they are called pothole arches. Because this photograph was made at the beginning of a sudden storm, you can see the rainwater running down the rock from the top of the arch, and this is the very process that carved these arches to begin with, and that will also eventually one day cause this magnificent national treasure to collapse.

“Alone in the silence, I understand for a moment the dread which many feel in the presence of primeval desert, the unconscious fear which compels them to tame, alter or destroy what they cannot understand, to reduce the wild and prehuman to human dimensions. Anything rather than confront directly the antehuman, that other world which frightens not through danger or hostility but in something far worse—its implacable indifference.” – Edward Abbey (1968)