When the days get shorter and colder in Florida and winter is approaching … to be in Florida means many things to most people – warm weather, no shoveling snow, Christmas at the beach, etc. All focus is on South Florida and that is where all the snowbirds go (northerners or Yankees for all you non-native Floridians). Miami, Naples, Tampa, Fort Lauderdale, Fort Myers, West Palm Beach and every coastal town and city in between get swarmed by these Midwesterners or New Englanders (depending on which Interstate they use for their particular annual migration) and their numbers increase every season. Over the years growing up in Southwest Florida, I’ve had the opportunity to meet several wonderful Northern naturalists, and there is a LOT of them! Not to say that there aren’t any in the South, but it seems that there is a disproportionate number of birdwatchers, wildflower photographers, and such that do visit Florida every winter. The interesting thing is they all go to South Florida. There is so much information on the web about the winter flora and fauna in this state written by these warmth-seeking visitors that there are large gaps in the natural history in North Florida in the fall and winter. Not that I mind – I moved to North Florida to get away from these people and all the development and destruction of natural places that they bring with them. North to the South I jokingly call it. It just gives me a whole new region of botany and zoology to photograph, study and write about!Throughout this winter season, I will be posting photo blogs often and regularly about all the things that are North Florida. Since I am living in Tallahassee for the second time (I went to college here years ago and didn’t carry a camera everywhere with me then) and am finding all kinds of new plants and animals that I’d never photographed before – it should be very interesting to see what I run into. 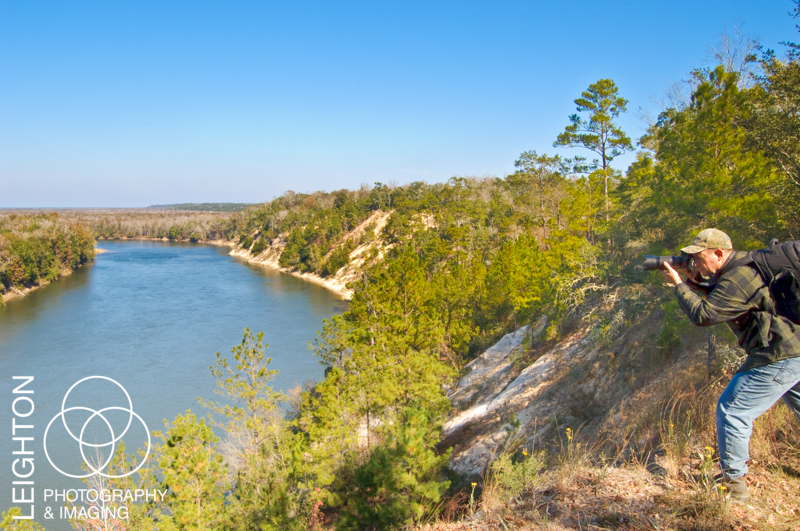 Native orchids will be a main factor in this series, since I am a very avid orchid hunter and am constantly looking for undiscovered colonies of them. I (as always) will keep the exact locations to myself because of the few bad seeds out there who take it upon themselves to “help” the orchids by stealing them, or to those who are greedy collectors and “help” themselves by stealing them. Many of them are so rare that taking just a few from the wild means that their seeds will never get dispersed naturally and could spell the beginning of the end of a whole colony or population that is barely maintaining its numbers as it is. Not to say that they are all in decline, but I can spend years looking for a particular species – so they are definitely not common or easy to find! There is also a great deal of satisfaction and sense of accomplishment when I do find something exceedingly rare or highly unusual.

Other non-orchid photos will be thrown in the mix for a little variety. These will be photographs taken while orchid hunting and have a range between Gainesville and Panama City on the Panhandle. Comments are very welcome and will be visible at the bottom of this post for all to read and respond. Enjoy! 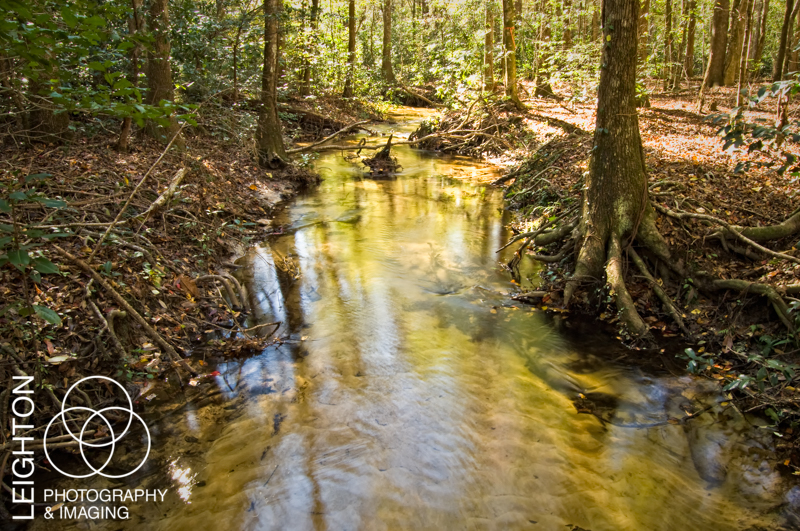 Unnamed forest creek flowing through Gadsden County. Heavily wooded slopes are perfect for finding wild orchids. Be careful of fallen autumn leaves, as they can send you on what I call the “three-point shuttlebutt ride” downhill fast. Soles of your boots and your rear end down on the ground, you have no choice but to enjoy the ride, because nothing will stop your rapid descent except a sinkhole, a creek like this at the bottom of a ravine, or a big tree or rock! My suggestion – hope for a big tree to smack into! 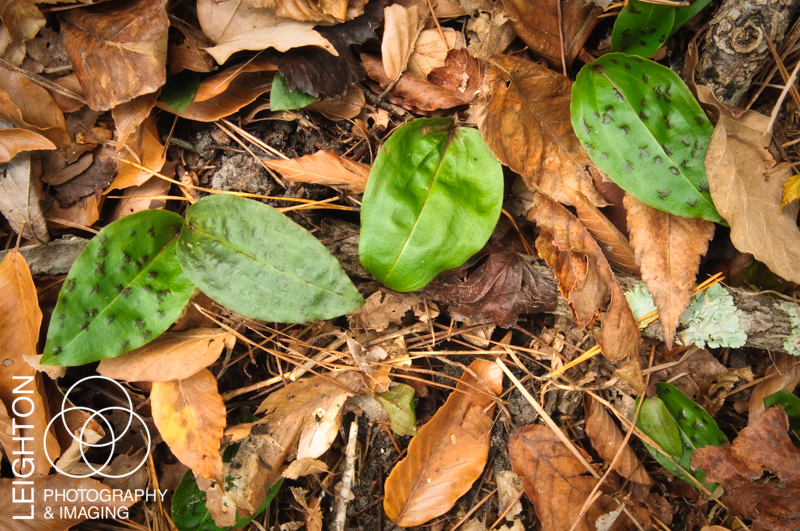 On one involuntary downhill joyride recently, I did find an orchid that I have never seen before. It was the Crane-Fly Orchid (Tipularia discolor) and there were three of them. These photographs were taken days later at a similar habitat about 35 miles from my first discovery. The crane-fly orchid flowers in the summer and is nearly invisible because of the brown/green/purple tiny flowers on a same-colored stalk. I have yet to see this northern orchid in flower, but now I know where to find them. In the fall and winter, this cool terrestrial puts out single leaf that is covered in purple spots and has a purple underside, except in the case of the very rare green form of this orchid (Tipularia discolor forma viridifolia). This green form has no purple spots and has a green underside. Both versions can be seen in these photos. 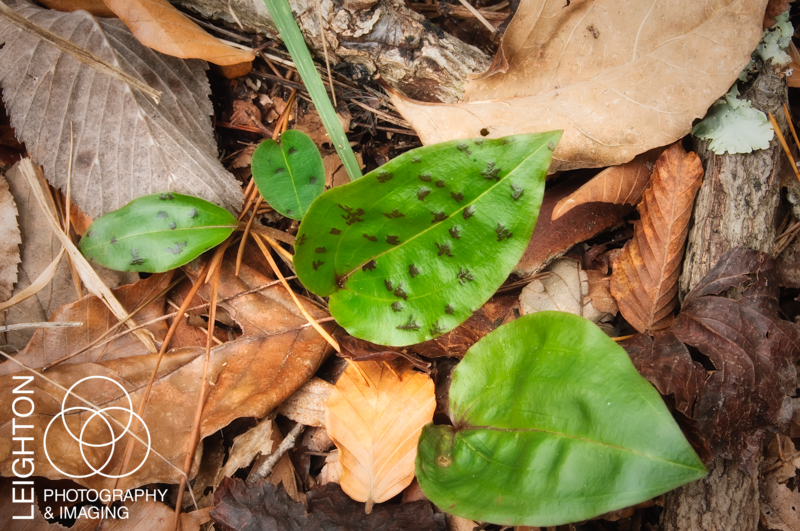 There were about five colonies of the crane-fly orchids found within a half mile of each other totaling about 400-450 plants. The amazing thing about this location was that about 70% of them were the more rare green form!!! I have no idea if the flowers differ in color, but I will find out eventually this summer. Hopefully some of my readers will let me know in advance. 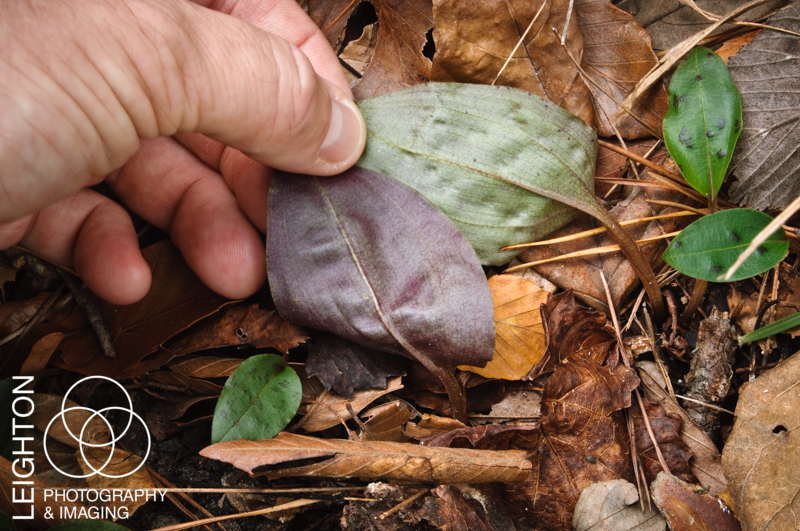 Here is a view of the underside of both forms of the crane-fly orchid. One is green, and the other is purple. This winter leaf only lasts through the cool months and is gone by late spring. That is why it is important to find them in the winter, so they can be revisited in the summer to see them in full flower. 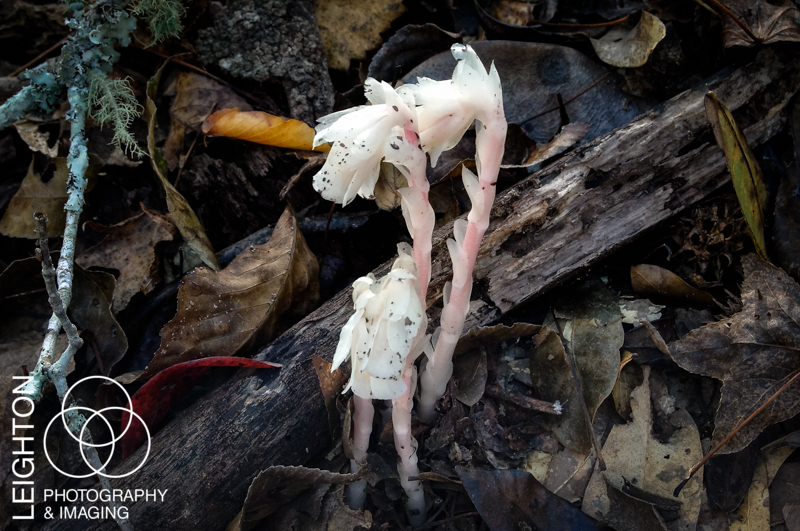 While not an orchid, mushroom, fungus, or anything related, the delicately beautiful Indian Pipes (Monotropa uniflora) – also known as the ghost plant – is actually a parasitic plant called a saprophyte. This unusual plant feeds on decaying tree roots and is found in very rich and old forests, but I have found them growing in Central Florida in an oak/palmetto scrub. Since they do not require sunlight to grow, they are most often found in the darkest parts of the forests where there is also a lot of moisture present. Therefore they do not need to be green (contain chlorophyll) to convert sunlight into energy. I regularly encounter these on my search for rare orchids. 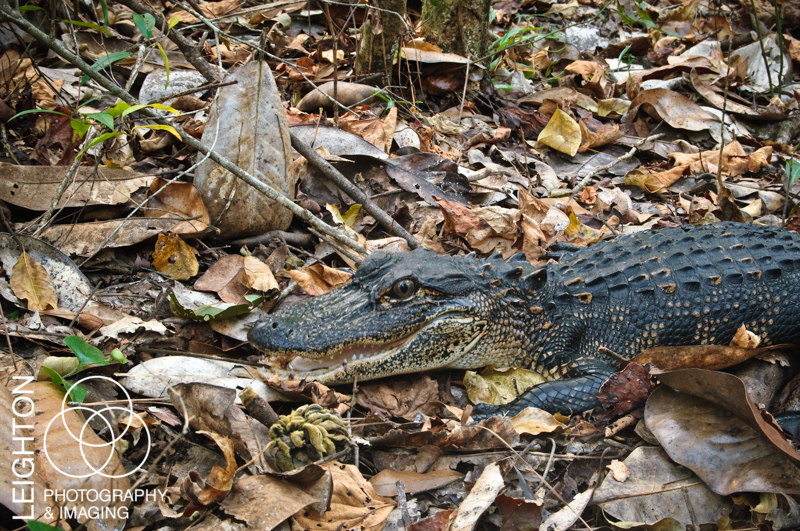 For a while, I was absolutely determined to find another northern orchid – the Southern Oval Ladies’-Tresses (Spiranthes ovalis) – another orchid I had yet to see in the wild. In my search – I ran into this young alligator in the forest near Wakulla Springs. Unusual to see away from water, but I’ve encountered them on occasion in hardwood hammocks in the Florida Everglades – a good distance inland and away from water. I can tell you that this alligator made me jump. I thought it was dead at first. It was almost black and the eyes looked completely lifeless and it was quite cold out. It suddenly slapped my tripod with such a powerful blow that had the camera not hit me in the chest where I caught it – there could have been some serious damage to it! Then the hissing started! I snapped this shot off and left it alone. This is a wonderful chance to promote Bogen professional tripods! No damage to it at all and it still works great!!! 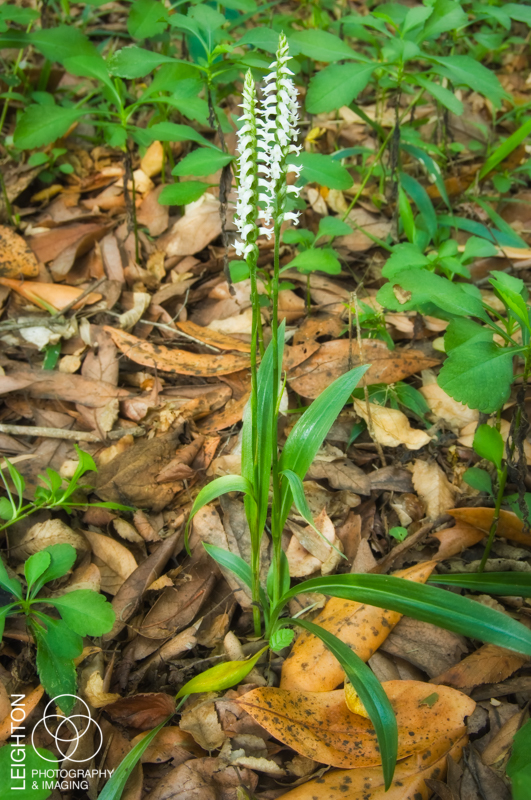 Finally, I did find the orchid I was hunting for, but after about 300 miles of travel over the space of about three weeks. The wonderful Southern Oval Ladies’-Tresses (Spiranthes ovalis var. ovalis) – and there was a HUGE bonus. I found both forms of this rare Florida native orchid in the same location. I hadn’t even hoped for this! There are quite a lot of Spiranthes species to be found in Florida. Around fifteen types, but I’m sure all the professional botanists out there will disagree with each other as to the correct numbers that are actual separate species, but I’m not too concerned with arguable details. I just find them and photograph them. 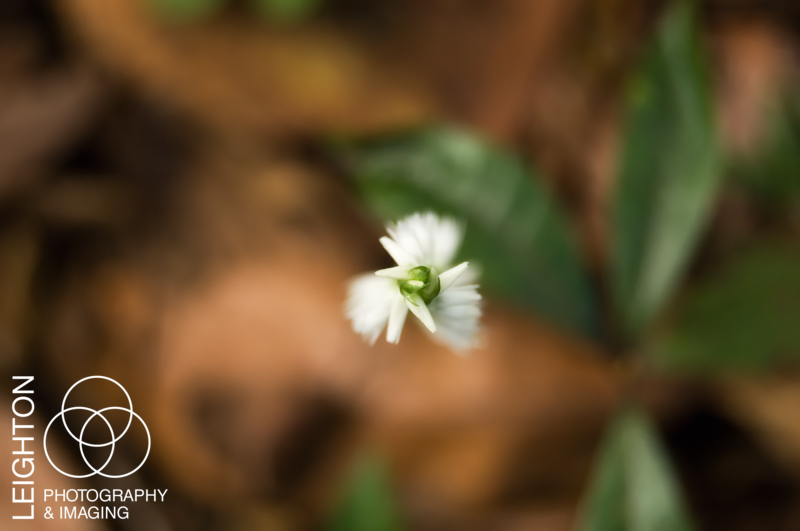 This particular beauty stands out to me for its simple symmetry. Most Spiranthes orchids have flowers that spiral around the stalk (or spike) but this one carries its flowers in three almost vertical columns, with a slight spiral. It is very noticeable from the side. 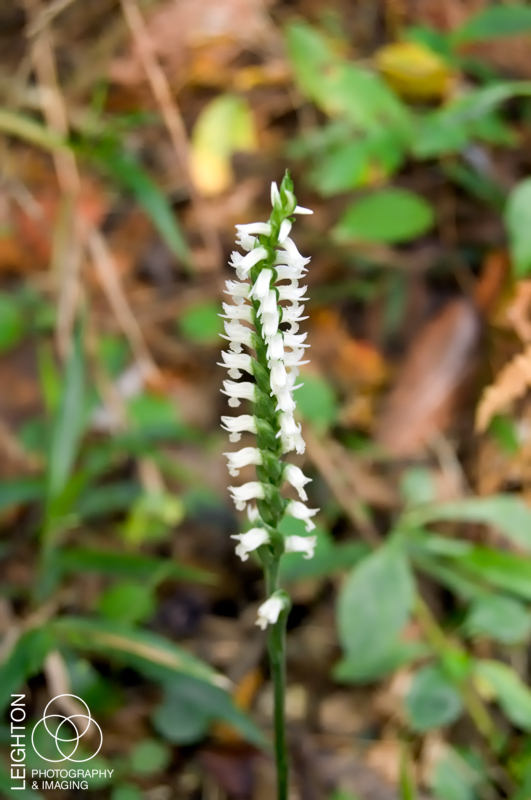 In this particular very isolated location, I found about fifty-five of these rare orchids. I had already given up on finding them, and was walking back in the general direction where I believed my car was parked – frustrated once again – when I started finding them. One, then a small group, then they were everywhere in a shallow depression in the forest. 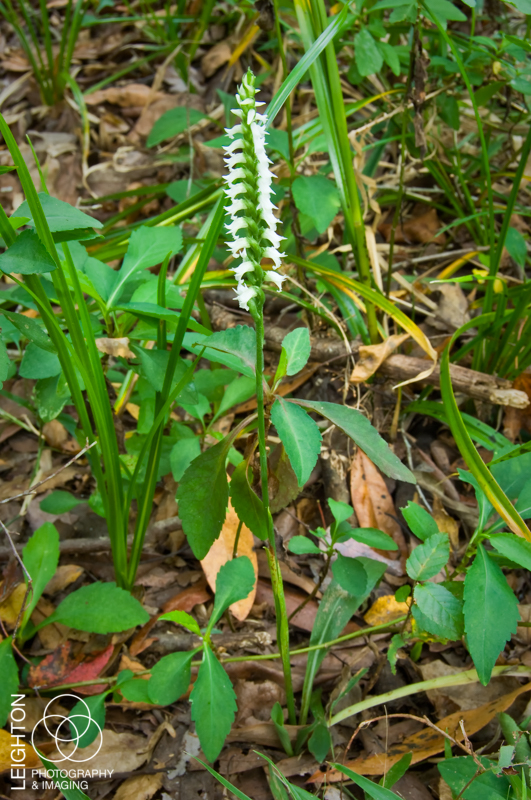 Here is where I found the other variant of this species – the Northern Oval Ladies‘-Tresses (Spiranthes ovalis var. erostellata)!!!! This subspecies is an example of evolution in progress! WOW! And I found about eight or nine of them. This orchid’s flowers never fully open, and by the time the flowers appear, it is already pollinated and “fruiting” or developing seeds in the ovaries of the flowers. Therefore – the flowers really never need to open. 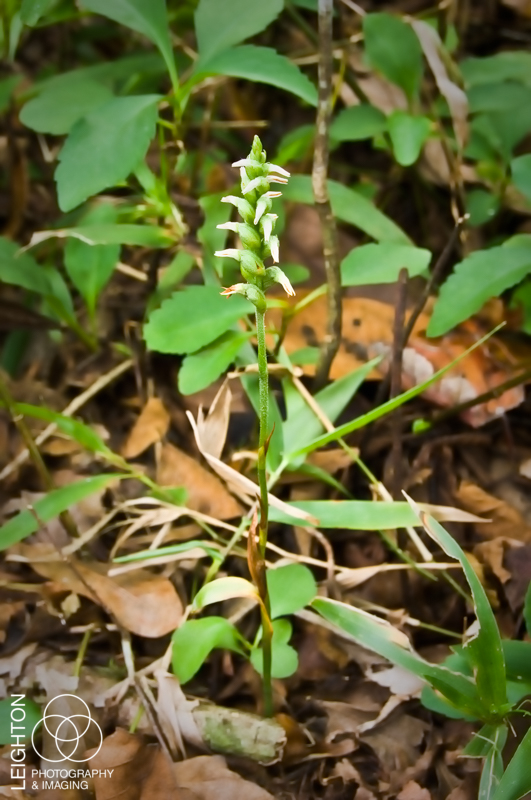 In these photos, you can see the swelling green seedpods and the never-to-open flowers. This is because this orchid (var. erostellata) is self-pollinating. The previous sub-species (var. ovalis) requires an insect pollinator for fertilization, and by the time seedpods were this developed, there would be no trace of flowers. 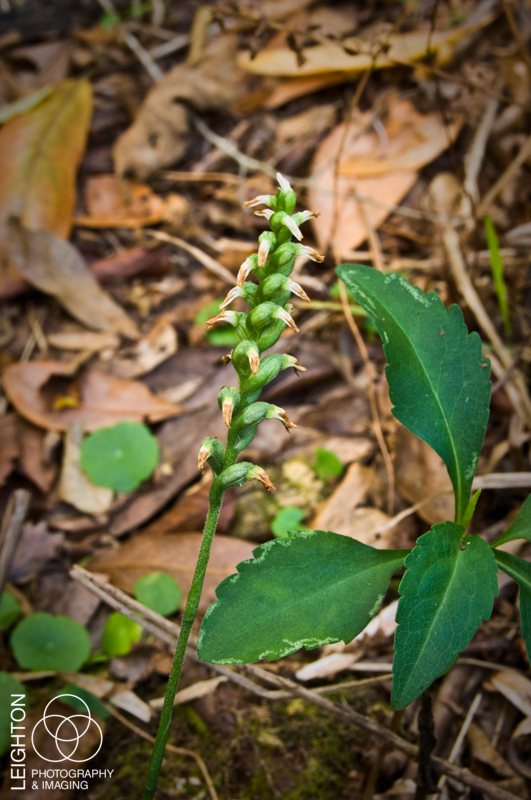 To me, this represents a tiny peek into evolution in progress – one species splitting into two different species. Let’s just hope that untouched and isolated habitats like this stay untouched for the next centuries and millennia to let it happen naturally!

The Search for the Cranefly Orchid