Today’s post is brought to you by my stomach. Since I moved to the Pacific Northwest three years ago, I’ve sorely missed my well-developed knowledge and skills of natural foraging any time I was out in the woods or Everglades of my native Florida. In the past three years, I’ve learned quite a bit (and it is still continuing) but not enough to quantify a lifetime of living in a subtropical environment. I’ve found a few favorites that I see regularly, and the one I’m going to tell you about today is extremely bountiful everywhere, particularly in the woods across the street from my home –  the legendary salmonberry. 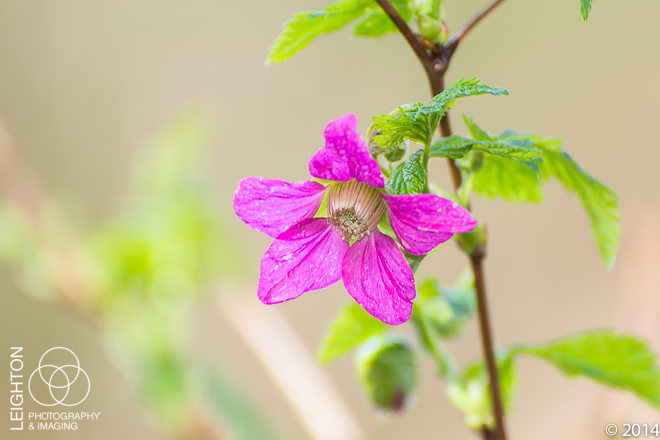 (click any image to enlarge or get more regional/historical information)

The salmonberry (Rubus spectabilis), like similarly-related fruits such as blackberries, raspberries, thimbleberries, loganberries, boysenberries, etc. are all members of the rose family. All of them have five-petaled flowers, and produce bright orange berries that are actually clusters of drupelets, each containing a seed. There Is a lot of variation between fruit colors when ripe, and it seems to depend more upon each individual plant instead of location or time of year. Bright orange is typical, but I’ve seen many that were bright red (and delicious!) or even a few that were a dark purple. 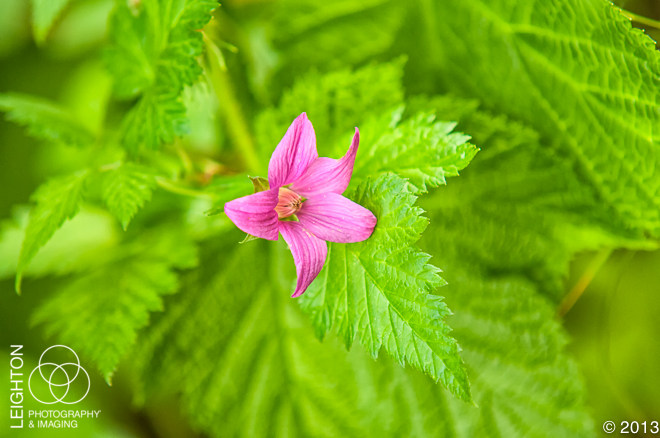 Salmonberry Blossom at 3000′ in the Cascade Mountains, Snoqualmie Pass, WA

As a somewhat “viney” shrub, the very common salmonberry is found in moist to wet forests from sea-level to rather high elevations in the West Coast mountains, and is restricted natively to Washington, Oregon, Northern California, parts of Idaho, British Columbia and parts of Alaska. I’ve even seen them grow and bloom in great profusion near alpine lakes at the very top of Snoqualmie Pass at the top of Washington’s Cascade Mountains and within a stone’s throw of the Puget Sound. Most often, you will find them growing near creeks and stream with moderate sunlight, and most of the time (but not always) shaded by larger conifers, such as Douglas firs, western red cedars, and western hemlocks. In these rich, moist soils they will grow up to 6-8 feet tall, and occasionally up to 12 feet where in early spring, and one of the first Pacific Northwest woodland flowers, they will bloom in a profusion of bright pink to magenta blossoms, quickly ripening by late spring and early summer. When not in flower or bearing fruit, they are easily recognizable by their sparsley thorny, woody, weak stems that will turn brown and even more brittle by late fall and into winter. 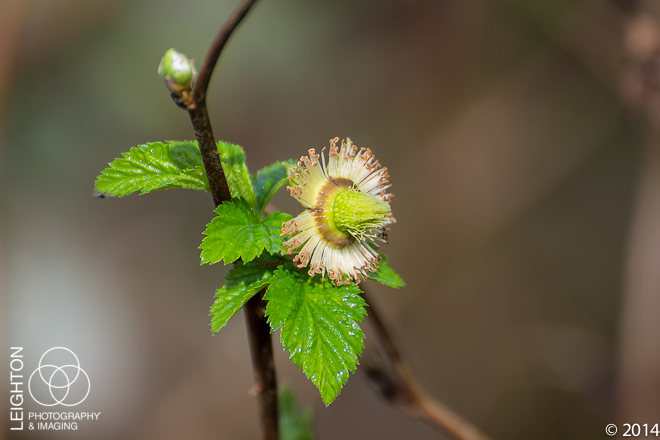 Salmonberries are vitally important for many of the denizens of their varying habitats. The leaves and new green shoots are consumed by deer, elk, moose, mountain goats, rabbits, porcupine, and even beaver, while the fruits themselves are relished by a variety of birds, foxes, coyotes, squirrels, bears, chipmunks, pikas, raccoons and a host of other forest wildlife. Hummingbirds, bees and other insects rely on these early spring sources of nectar (sugar calories) for their own survival. 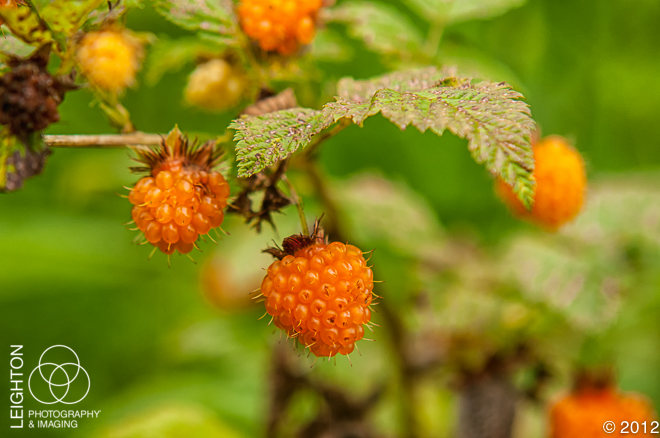 These vibrant and somewhat watery fruits are also historically important for humans, as the Native American tribes of the Pacific Northwest used this bountiful crop for the fresh berries they provided as raw fruit, mixed with oolichan grease (the fat from the candlefish – a local fish similar to smelt) or salmon spawn, or just simply eaten with fresh salmon mixed with roe, as their ripeness incidentally coincided with the spawning of the return of the Chinook salmon who begin their great spring runs up the rivers to spawn (and where the name “salmonberry” originated). Tender shoots were peeled and eaten for their sugary sweetness, and the leaves were eaten raw or steamed. 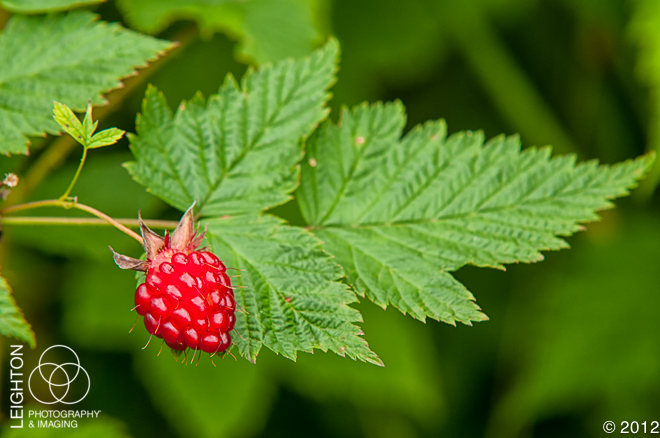 Some Salmonberries can be Bright Red or Even Purple!

Interesting fact: Did you know that the salmonberry as we know it is actually an aggregate of drupelets? These are groups of small berries each containing a seed that form a single cluster from one flower – just like other bramble berries such as raspberries and blackberries. 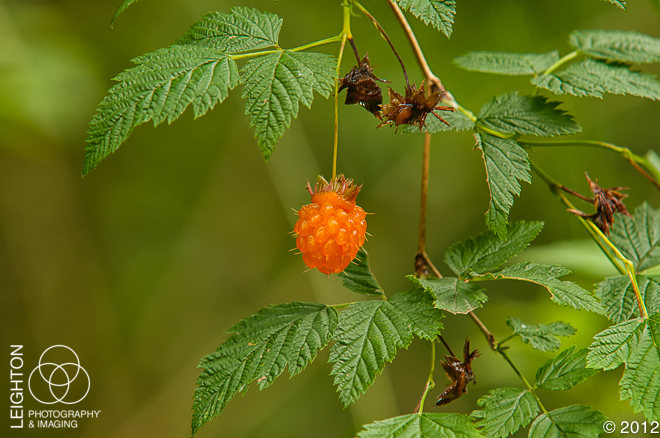 Click the name of each fare and the link will take you to various recipes from local foragers and “nomnivores”….

SALMONBERRIES IN THEIR OWN SYRUP 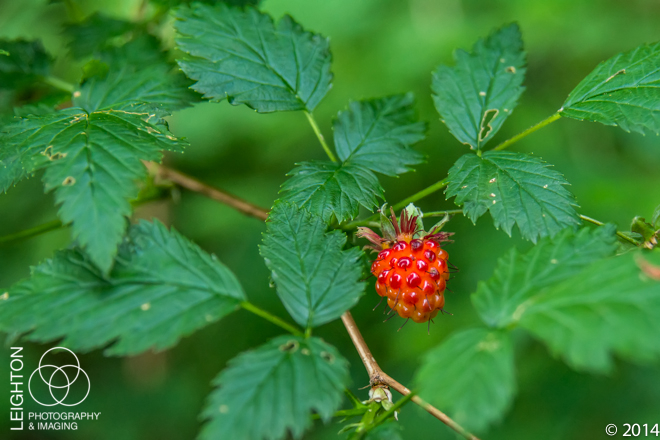 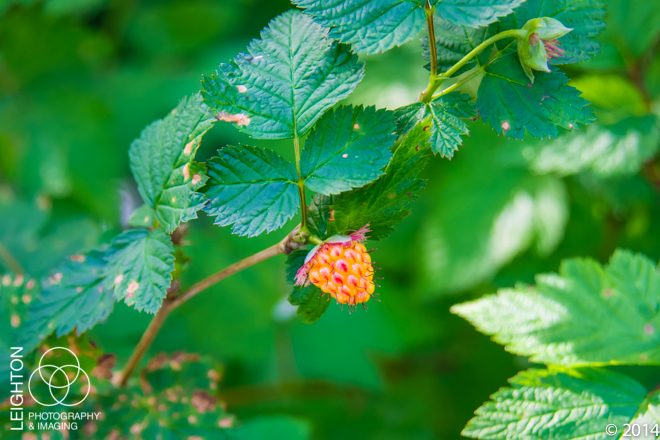 An Unusual Bicolored Salmonberry Growing in the Wetlands above Deep Lake in Thurston County, Washington.