One of the perks of being a nature photographer is getting to see so much intense wild beauty that most people regrettably will never see except on television or online. Over the years I’ve enjoyed so many jaw-dropping views, experienced incredible (and often unbelievable without proof on camera) sights, and witnessed countless incredible experiences that have individually tweaked how I see the world, and as a whole has greatly influenced my general worldview and place in the world. I’ve just had another one of these experiences to add to the list.

Yesterday I was driving up Mount Rainier in Washington State when the rain turned into snow and visibility got to the point where I had to abort my trip to where I was headed. Not that the weather was too harsh, but I still have the tires on my car from Florida. It was getting a bit too slippery for my taste. Going back down the mountain bitterly, I took a side road blindly and kept going. I had nothing but time and empty memory cards on my cameras. 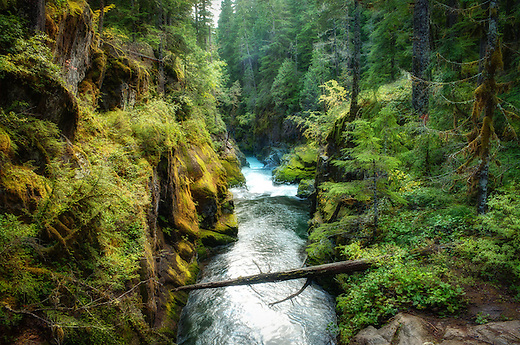 On the Eastern side of the mountain there are numerous icy fast rivers running down the slopes from the glaciers and snowfields above. I stopped often and hiked off into the forest. I was lucky enough to be next to the Ohanapecosh River when sunlight suddenly burst through the clouds as I was photographing Silver Falls. The lighting was spectacular! I was blown away by the vibrancy of the color of the sunlight on the leaves and rocks, the violence of the waterfall behind me as I was framing my shot, and the icy spray of the river on my cold hands as I manipulated my camera’s settings.

After spending much of the afternoon photographing this river, a couple of others, some waterfalls, and lots of incredibly variable and brightly-colored mushrooms – the rain stopped and the sun came out. Then I headed back up the mountain….. more photos coming soon!

Mountain Stream with a Touch of Snow