If you’ve ever hiked or visited the Pacific Northwest, you’ve undoubtedly come across this majestic mollusk – the Pacific banana slug. While most people take a look and say, “cool!” and continue hiking, these slugs are actually very interesting and worth learning about.

The Pacific banana slug (Ariolimax columbianus) is the world’s second-largest terrestrial slug in the world and can grow up to 9.8 inches (25 cm) long. They live on the forest floors in the Pacific Northwest, and are most often seen cruising along the leaf litter or on decaying wood at a maximum speed of  6 1⁄2 inches (17 cm) per minute. Because they get moisture through their skin, banana slugs need a moist environment in order to survive, and the wet, mild climate of western Washington, Oregon and British Columbia meets that need perfectly. 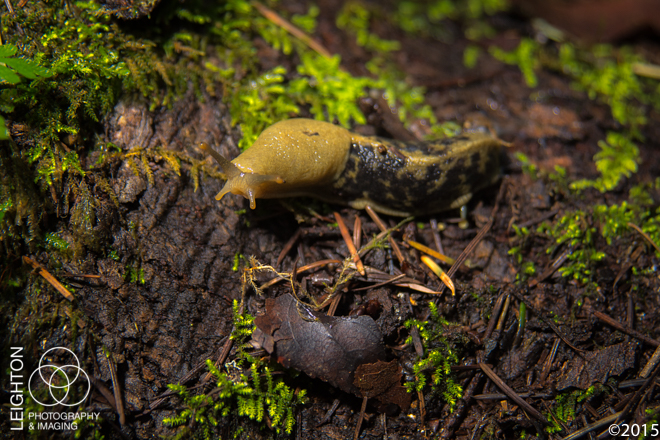 Typical coloration and habitat in King County, WA near Seattle.

Banana slugs are highly variable in appearance, but most tend to be either a solid light to bright yellow (hence the name banana slug) or yellow with brown spots. Sometimes brown, green or even white ones are seen, and color can often an indicator of the slug’s age, health, how moist or dry it is, or even can be a clue as to what it’s been eating. The body structure of the banana slug is very simple. It has a “foot” that is used for locomotion in the same way terrestrial or aquatic snails move about. The “hump” part of the back is called the mantle, and has an opening on its right side called a pneumostome that is a simple airway for the single lung that it uses for respiration. Their entire body is covered in a thick slime helps it retain moisture and aids in “sliding” through the forest. 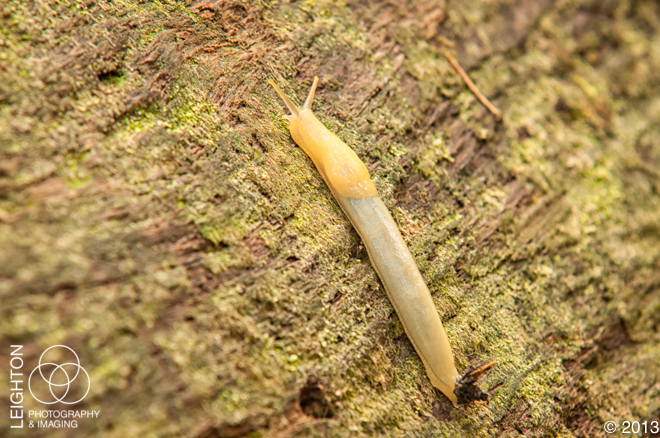 A close-up of a Pacific banana slug in the Hoh Rain Forest on Washington’s Olympic Peninsula on a chilly, yet rare sunny day.

All banana slugs have two pairs of tentacles. The upper pair is the largest, and they are used to detect light intensity or lack of light, much in the way our eyes do. The smaller pair is used to detect and differentiate smells., much in the way our noses do. For protection, both pairs of tentacles can be retracted inside the slug’s body in case of danger. 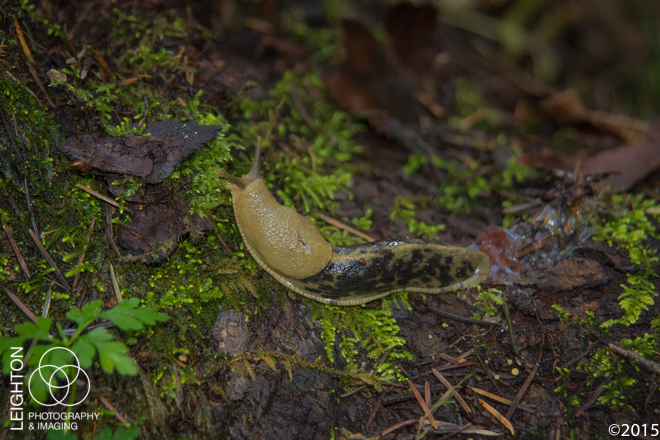 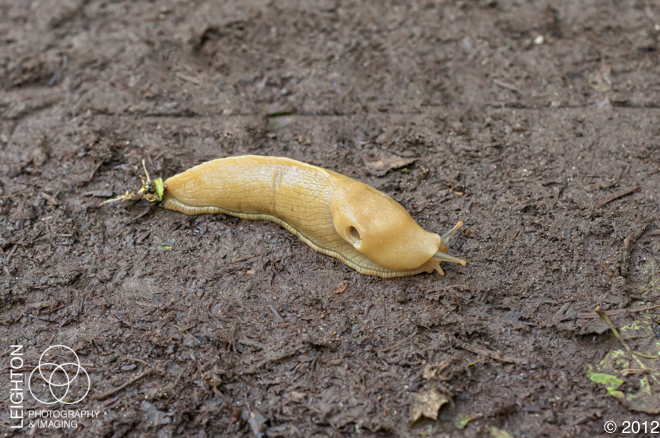 A solid yellow version of the Pacific banana slug (Ariolimax columbianus) filters through the rich organic humus on a warm summer day in the Dungeness National Wildlife Refuge on Washington’s Olympic Peninsula. In this photo you can clearly see the pneumostome on the right side of the mantle. This opening leads directly to its single lung.

Working alongside mushrooms and other fungi, banana slugs are detritivores that help turn decaying matter into soil humus. They eat leaves, dead plant materials, moss, fungi, and animal droppings and help in the movement of nutrients throughout the forest and prefer mushrooms over other foods, much to the detriment of human mushroom foragers. Because slugs do not have teeth, food is broken down using its ribbon-like radula, which works like a millstone to grind food into smaller and smaller particles that are then ingested. 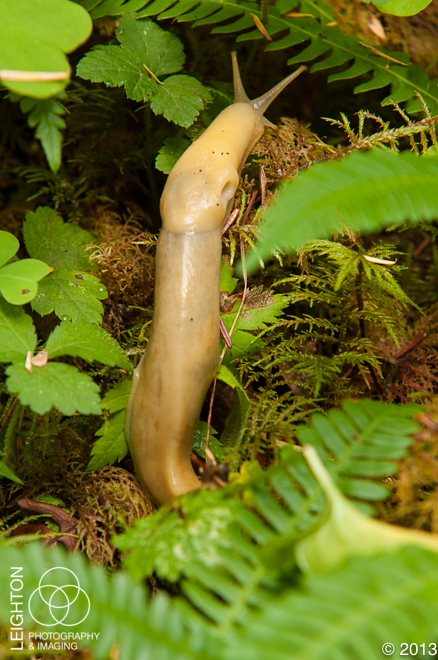 A solidly yellow Pacific banana slug slowly makes its way through the Hoh Rain Forest on the western side of the Olympic Mountains. 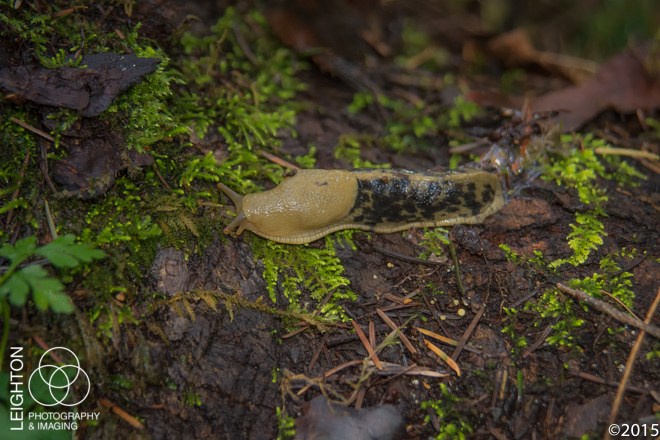 When it comes to mating and reproducing, things get really weird with slugs. Most slugs are hermaphroditic, meaning each slug has both male and female reproductive organs. Even though they are capable of asexual reproduction (self-fertilization), sexual reproduction is the most common way they reproduce. When a slug is ready to mate, it will leave chemical markers (pheromones) in its slime trail that when found by another slug in a similar state or readiness will find its new mate. From here, they will eat each other’s slime from their bodies, then the actual courtship will occur with much display of each other’s sexual organs and different behaviors. As courtship progresses, the banana slug pair intertwines, wrapping themselves into an “S” position and stimulating each other for several more hours. Their genital areas swell as the pair move even closer together. Penetration takes place, then each slug alternately releases and receives sperm, but it’s not over yet: now these slugs must disengage and this is where it gets really weird! Writhing and trying to pull apart while covered in thick, sticky mucus and still in a state of  “double penetration”. After long bouts of writhing and pulling while trying to disengage, the pair usually will resort to apophallation – each slug will gnaw off the penis of the other in order to separate. After mating, the sperm may be stored for several weeks in the case that the eggs are not mature enough to be fertilized. When the eggs are finally ready to be produced, each parent will leave around twenty small, translucent eggs hidden under leaves, logs, or decaying wood, where the new hatchlings are left to fend for themselves with no parental help. 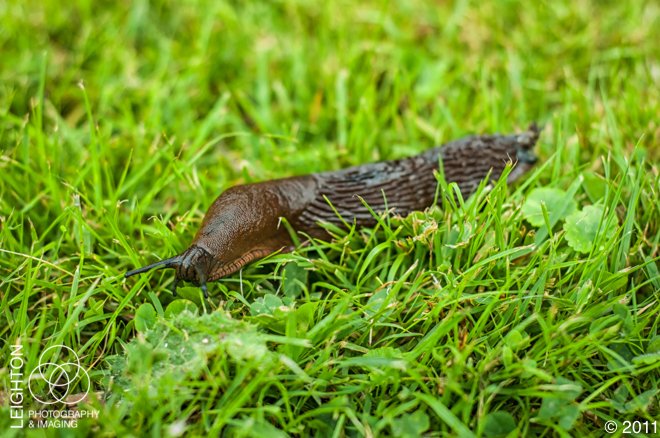 Not a banana slug, but I wanted to show other species of large slugs that also live in this part of the world: rufous garden slug (Arion rufus) photographed here in the West Hylebos Wetlands in Federal Way, Washington. 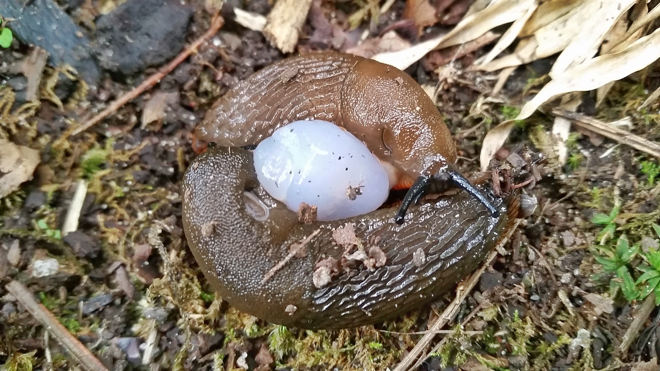 (Phone photo) Mating rufous garden slugs – shot these with my phone as I didn’t have my work cameras with me. Mating behavior is very similar to that of the Pacific banana slug. Notice the big ball of slime and sex organs. 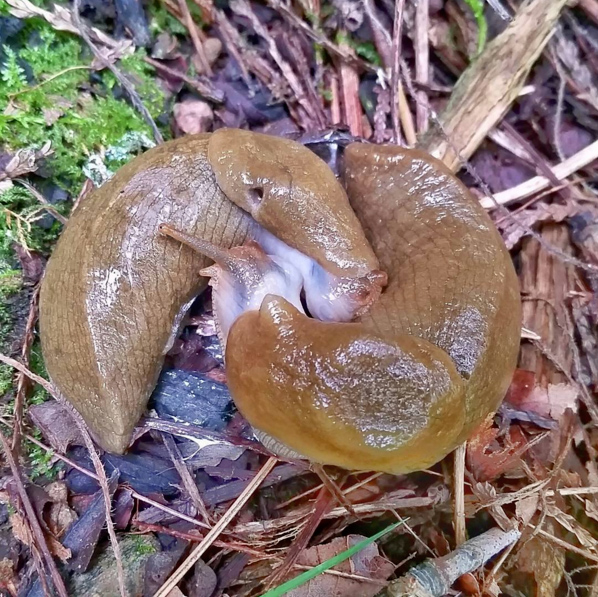 (Phone photo) Courting pair of Pacific banana slugs eating the slime from each other’s body in Bellevue, Washington near the banks of Coal Creek. 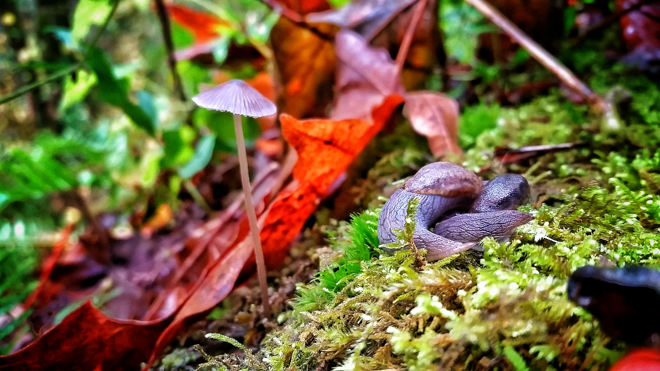