Welcome to the second article of my new series, “Profiles in Nature”.  Thank you so much to everybody for the overwhelming response I received on the first post, I wracked my brain to make sure I followed up with an even better offering and I think I’ve done so with a creature so prehistoric-looking and unusual, with the added bonus of some involvement I had with a special project including video. I hope you like it as much as I did putting all of this together.

The wood stork (Mycteria americana) is one of 17 species of true storks (Ciconiidae) in the world. A large New World tropical/sub-tropical wading bird with a long history dating back to the Late Pleistocene if not earlier, based on the fossil record. Its range stretches from Southern Brazil all the way north to southeastern North Carolina, and although it prefers fresh water, I’ve most commonly found it in brackish or salt water – mainly based on my location at the time and where I grew up on Southwest Florida’s Gulf Coast where it is infrequently seen. The wood stork typically stands at about 3′ to 3 1/2′ (83–115 cm) with a wingspan of under 5′ up to 6′ (140–180 cm), with snowy white plumage and black flight feathers and tail. The head is featherless – very similar to a vulture, but is not known to eat carrion. 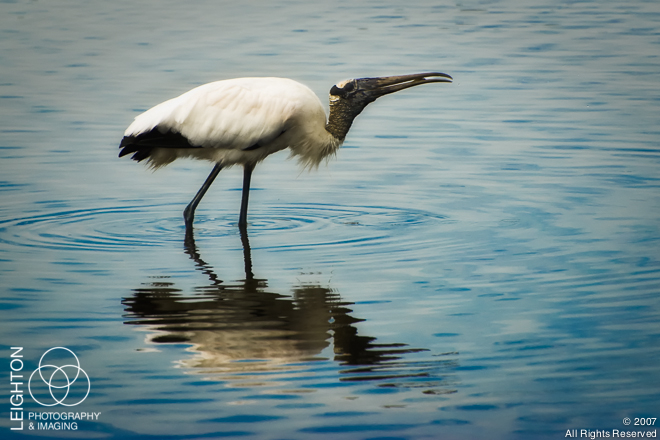 Considered a “species of least concern” in the context of population across its vast range, the wood stork in the United States is currently listed as an endangered species. A century of killing them for their snow-white feathers when feathered hats were in fashion and all the rage, to the disaster of insecticides such as DDT, which caused their eggs to be too brittle to develop to hatching, all but wiped out American wood storks. Down to an estimated 5000 breeding pairs and declining in the Unites States, 3000 breeding pairs in Mexico, and one single remaining colony in Costa Rica, and the last of colony of Belize vanished, the Endangered Species Act of 1973 was crucial in not only saving the wood stork, but it helped it recover to the current breeding population of about 11,000 pairs in the United States alone. I can personally attest that nearly every successive year I’ve seen nearly an extra 40-50% of individuals out in the swamps and estuaries.

A very active hunter during the day, I have seen them catch and eat almost anything their bill touches as it wades in the shallows, probing and prodding for fish, frogs, crayfish, etc. Once a wood stork’s bill touches potential food – the bill snaps shut often followed by an acrobatic flip of the prey for positioning, and down the hatch it goes. At least half a dozen times I’ve watched one catch a venomous water moccasin, thrash it senseless by swinging it back and forth and dash it against the ground or water before wolfing it down whole.

I’ve always known it as a child as a silent bird. I’d never heard one make a sound, whether in flight or during breeding season. As I became more interested in natural history around my home and later as an adult became a published nature photographer, I still knew next to nothing about these voracious and secretive birds.

One day the nonprofit conservation group, the Wildwood Preservation Society, invited me to photograph a colony of breeding wood storks for their campaign to save the Fred George Basin, located in North Florida’s Leon County to raise awareness of the plight of a small watershed near the Georgia border that was crucial to the survival and recovery of endangered American wood storks as well as other native Floridian flora and fauna from encroaching development. Also invited was videographer, photographer and friend Rob Pepple, to get some footage. Little did we know that we would record the first-known audio/video of nesting wood storks. No longer silent, these wood storks were chatting, chirping, and squacking at each other very noisily… and it was amazing! 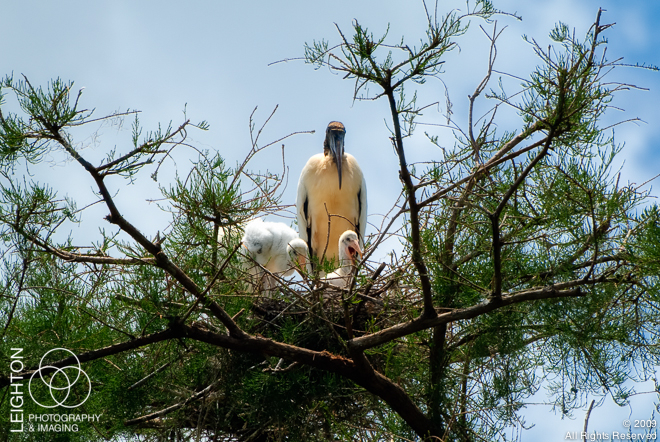 Family of Wood Storks in a North Florida Cypress Tree

One of the methods of survival of the wood stork is to build a nest over water inhabited by alligators. Adult wood storks have no natural enemies (besides humans), but their nests are frequently raided by raccoons. By building their nests in cypress trees that commonly grow in water, the risk of attack by predators is greatly reduced ensuring the more likely survival of the young. The image above shows a nest at least 30′ above the water, where I have seen many alligators silently swimming among the trees. By preserving natural nesting habitats such as this one in the Fred George Basin – I hope these ancient and secretive living fossils not only recover, but thrive in an ever-changing world and uncertain future.

The Wildlife and Nature of Washington

The Florida Sandhill Crane – Sentinel of the Okaloacoochee Slough *Updated*

Photographs of North American nature and wildlife from the wilderness, suburbs and cities around the continent.