This is my third entry into my new series, Ancient America which features a minimalistic, raw and unpolished look at black and white landscape photography from around North America from the viewpoint of what it would have looked like when the first people arrived.

Because this part of Washington’s Pacific Coast is still home to various tribes of the Coast Salish people who have been living here for many thousands of years, I’m including an old local legend inside this post from the Quinault Nation in order to attach a little bit of place history with those who still live within sight of these amazing rock formations, and a map for those who might be more interested in learning more. 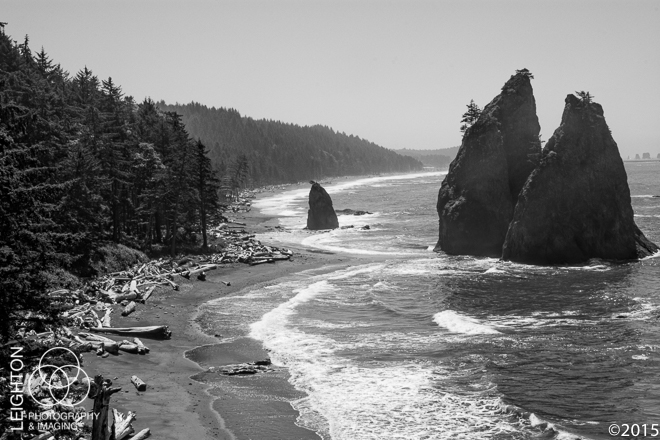 Sea Stacks Tower above the Sitka Spruce that line the Pacific Coastline of Washington’s Rialto Beach and Olympic National Park.

A long time ago, there lived a young girl who had a dog of which she was very fond. She took the dog with her wherever she went; and at night, as was a common custom at that time with young girls, the dog slept at the foot of the bed.

Every night he would change into human form and lie with the girl, and in the morning, before it was light, would turn back again into his dog shape: so no one knew anything about it. After a time she became pregnant; and when her parents found it out and knew that the dog was the cause they were greatly ashamed, and calling the people together they tore down the house, put out all the fires, and moved away from the place, leaving the girl to die.

But Crow had pity on her, and, taking some coals, she placed them between two clam-shells, and told the girl secretly that after a time she would hear a crackling, and to go to the spot and she would find fire. So the girl was left alone, for the people had all gone a long way across the water. She sat still for a long time, listening for the crackling, and when she finally heard it she went to the place and found the fire as Crow had said.

Not long after this she gave birth to five dog pups, but as her father had killed the dog, her lover, she had to look after them by herself, and the only way she could live and care for them was to gather clams and other shellfish on the beach. There were four male pups and one female, and with the care their mother gave them, they grew very fast.

Soon she noticed that whenever she went out, she heard a noise of singing and dancing, which seemed to come from the house, and she wondered greatly. Four times she heard the noise and wondered, and when, on going out again, she heard it for the fifth time, she took her clam-digger and stuck it in the sand, and put her clothes on it to make it look as if she were busy gathering clams. Then she stole back by a roundabout way, and creeping close to the house peeped in through a crack to see what the noise might be.

There she saw four boys dancing and singing, and a little girl watching the place where the mother was supposed to be digging clams. The mother waited a moment and watched, and then coming in she caught them in human form, and scolded them, saying that they ought to have had that form in the first place, for on their account she had been brought to shame before the people. At this the children sat down and were ashamed.

And the mother tore down the dog blankets which were hanging about, and threw them into the fire.

And she made them bathe everyday to try to get tamanous for catching whales, and after that they hunted the hair-seal to make floats of its skin.

And the mother made harpoons for them of Elk-bone, and lines of twisted sinews and cedar, and at the end of the line she fastened the sealskin floats. And when everything was ready, the boys went out whaling and were very successful, and brought in so many whales that the whole beach stank with them.

Now, Crow noticed one day, from far across the water, a great smoke rising from where the old village had stood, and that night she came over secretly to see what it all meant. And before she neared the beach, she smelled the dead whales, and when she came up she saw the carcasses lying all about, and there were so many that some of them had not yet been cut up.

When she reached the house, she found the children grown up; and they welcomed her and gave her food, all she could eat, but gave her nothing to take back, telling her to come over again if she wanted more.

When Crow started back, the girl told her that when she reached home, she was to weep so that the people would believe they were dead. But Crow, on getting home, instead of doing as she was told, described how the beach was covered with sea gulls feeding on the whales that had been killed by the boys.

Now, Crow had brought with her secretly a piece of whale-meat for her children, and after putting out the light she fed it to them; and one of them ate so fast that she choked, and coughed a piece of the meat out on the ground.

And some of the people saw it, and then believed what Crow had told them, as they had not done before. Then the people talked it all over, and decided to go back; and they loaded their canoes and moved to the old village. And the boys became the chiefs of the village, and always kept the people supplied with whales.

Sometimes the Best Stories Happen Behind the Scenes! (Notes from the Field #1)