When I was a kid growing up in Bradenton, Florida – the most difficult of all the local lizards was the “blue-tailed” skink. We chased them all over the place for years, sometimes catching one, but usually being put to shame by a small reptile. Years later, they are still very difficult to get on camera. Once you see one remaining still for two or three seconds, by the time you lift the camera to your face it’s long gone. This one time in Southern Georgia…. I got lucky! 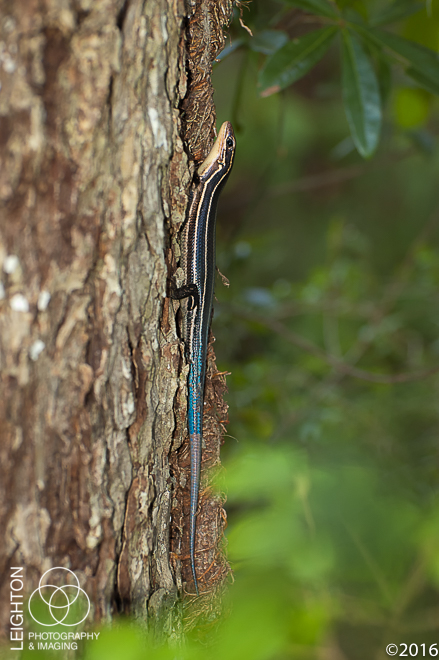 One of the most striking lizards of my youth, the southeastern five-lined skink is also one of the fastest. This large adult female – chased down and photographed in Thomasville, Georgia – shows the beautiful stripes common to this species, as well as the brilliant blue tail. This skink looks like it had lost and regrown its tail at some point. Sometimes they will have a bright red nose, and males when in breeding season will lose the blue coloration and much of the stripes, while turning a more brownish color with a broad bright red head!