Very recently I was taking a “day off” (inside joke for those who know me personally – I work in some capacity nearly every day of the year) on a scouting trip for future photography trips in the Olympic National Forest. Near the Skokomish Indian Reservation, I stopped at the southern end of the Hood Canal looking for potential low-tide clamming spots for finding wild dinner that night. As I stood on the shore, this wonderful raft of surf scoters drifted by and hung around long enough for me to go grab a camera from the car. This was my first time getting a really good look at them in the wild.

A raft of surf scoters drifts by on Washington’s Hood Canal on a brisk late afternoon. A type of large diving sea duck, the drakes (males) have beautifully bright orange and white bills with a black spot while typical in most ducks, the hens (females) have a rather drab coloration by comparison. Surf scoters can be found in the North Atlantic and North Pacific oceans, where they typically breed in the tundra of Alaska and Northern Canada, and are very occasionally seen on the Gulf of Mexico, the Great Lakes and even the British Isles. 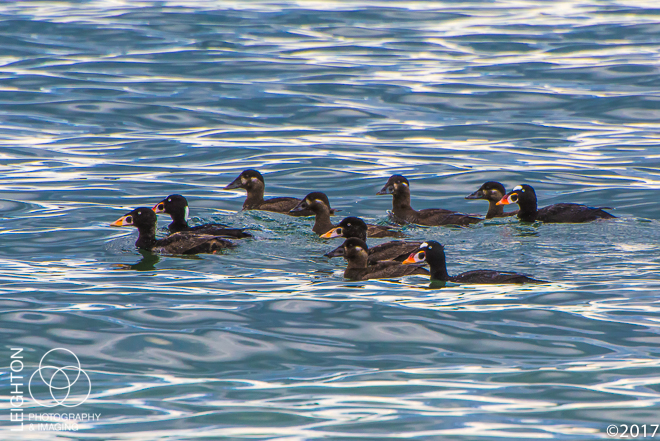