A few days ago I was driving eastward across the state of Washington across the barren sagebrush desert with my family when one of my boys needed to use the restroom. We stopped just east of Ellensburg at the Ryegrass Safety Rest Area in Kittitas County, and as usual… I started poking around the rocks and sages for any sign of life, and I was flabbergasted to see so many little chipmunks running around, just at the edges of the concrete of the rest stop facility. I ended up getting one my cameras out of the trunk and poked around a bit to get a couple of decent shots, and as we started back on the highway Idaho-bound, an interesting question popped up in my head that my wife and I began to bounce back and forth….

Why are these rodents so prolific around busy human locations? 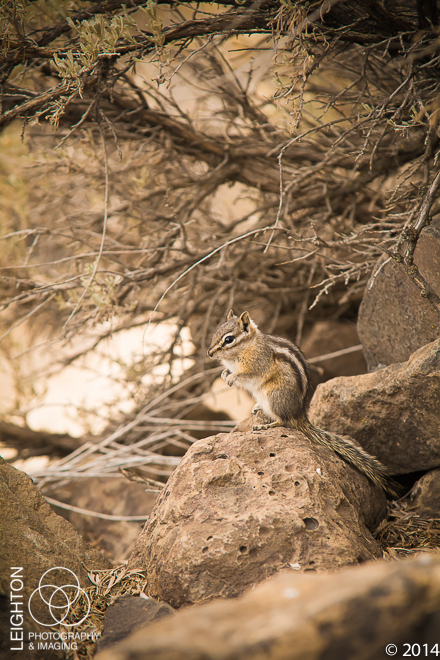 This started an interesting conversation in the car. As a full-time photographer who travels very often around the country, this is something I have noticed occurring commonly around Interstates at rest stops in particularly arid regions. Why would larger than normal populations of generally timid animals congregate near busy 24-hour a day operations? Here are a few of the ideas I came up with:

1. Protection from Predation – Humans may be the most destructive force on the planet when it comes to wildlife, habitat, and ecosystems… but the short term gain for these chipmunks is protection from natural predators found in this particular ecosystem. When people are constantly around, hawks, eagles, snakes, badgers, owls, and coyotes tend to listen to their self-preservation instincts and stay away. The lure of bountiful prey vs. personal (even perceived) danger often poses too much of a risk. I can’t ever remember anyone mentioning to me that they ever caught and ate chipmunk…. can you?

2. Free Food – All of us are guilty of this at some point. Even those of us who know better… you should never feed wildlife under any circumstance. Many times, the lure of a piece of bread or popcorn will easily cause a timid animal to come close, even if it is just so you can get a good look or photo of it. I (guilty!) have had many of many species of birds land on my head or take a corn chip from my lips (no I don’t do this anymore). For the wild animal in question, these are free/essential calories with little to no risk. Given time, offspring will get used to (and even expect) free food handouts. It’s cute when cute chipmunks or birds do it – not so cute for bears and alligators after they grow up and become apex predators.

3. Adaptation – Many social animals, like these chipmunks and other species that live in large colonies gain control over other groups with genetic or environmental superiority. Populations that don’t have to endure the stress their competition for resources faces gain a sudden advantage. In short turn (especially in animals with short natural lifespans) this behavior becomes an advantage that boosts one local population’s pool of genes artificially over a neighbor’s genetic group. In the end, those who adapt to artificial habitats and thrive are the genetic winners.

What do you think? Any other ideas?